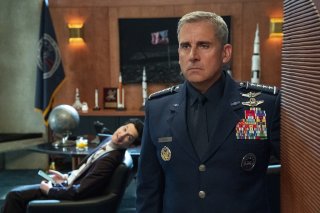 Back in March of 2018, President Trump formally announced his intention to create the U.S. Space Force, the first new branch of the U.S. Armed Forces in decades. Less than a year later, in January of 2019, Netflix announced that it was planning a "Space Force" of its own-a new scripted TV series of that name, set in a fictionalized version of that Space Force.

The “Space Force” show drew a huge amount of attention when it was first announced, as both Steve Carell's first starring role on a TV series since he left "The Office" in 2011, and the reunion of Carell with Greg Daniels, who co-created "The Office" and "Parks and Recreation" (Carell and Daniels are co-creators of "Space Force," while Daniels also created "Upload," an Amazon Prime show that debuted just a few weeks ago and has since been renewed for a second season.)

"Space Force," on paper, looked like one of the year's most promising new shows. Its creators have a strong comedy pedigree, it's assembled a talented cast full of TV comedy stars, and the concept has seemingly limitless potential for comedy.

Unfortunately, the show goes down as a major disappointment. It's not particularly well-written or funny, it’s dramatically inert, and none of its satire lands. The show may have gotten a lot of the details right about uniforms, technology, and other such aspects, as demonstrated by this Politico piece last week. But overall, it's a significant letdown.

If you came to "Space Force" expecting a version of "The Office" set inside the Space Force program, that's not what this show is at all; it doesn't really have anything in common stylistically or comedically with that show. One could also easily imagine a satirical send-up of the workings of a government department, in the tradition of Armando Iannucci's work ("The Thick of It," "In The Loop," and "Veep.")

But while "Space Force" resembles the cinematic style of those shows more than it does "The Office," the laughs just don't come. The ten episodes, all of which I've seen, average about one chuckle per half hour, which for the level of talent involved isn’t great. Call it “Unfunny Veep.”

And if you were expecting, for better or worse, shots at the Trump Administration, or just general comedy based on the absurdities of all current time, there’s virtually none of that either. The president is never mentioned by name; we just learn that "POTUS" loves to tweet and wants "boots on the moon" by 2024. There's also a plot in one episode about "FLOTUS" having some opinions about the uniforms.

Carell stars in “Space Force” as General Mark Naird, a veteran of the Air Force who at the start of the series is given command of the new Space Force. Set up on an old NORAD base in Colorado, General Naird is surrounded by a crew that includes Dr. Adrian Mallory (John Malkovich), a nerdish civilian scientist. Aside from occasional scenes where Carell retreats to a room and sings, much of the show's comedy comes from the natural tension between the general and the nerd.

Carell and Malkovich are both huge and versatile talents, and theoretically, the two of them should be great together. But the writers don't give them any good material.

Daniels' past shows, like "The Office" and "Parks and Recreation," have often enjoyed long runs by filling their large casts with very funny performers, and letting them loose. “Space Force” has been well-cast, but these talented actors are repeatedly let down by the weakness of the writing.

Also in the main cast are Jimmy O. Yang (from "Silicon Valley") as another scientist, while Ben Schwartz, essentially recycles his motormouthed blowhard persona from “Parks and Recreation,” as a smug social media guru. Comedy veteran Don Lake plays another general, Brad Gregory. The show seems to be in love with the joke that because Gregory is only a one-star general he's merely a glorified receptionist, but the steam runs out of that one relatively quickly. Kaitlin Olson shows up in one episode as an Elon Musk-like space entrepreneur, which isn't nearly as funny as it sounds.

Lisa Kudrow appears in a supporting role as Naird's wife, while Diana Silvers plays their teenaged daughter, a character who gets huge amounts of screen team even though the show truly has no idea what to do with her.

The scenes in which Naird meets with the secretary of defense (Veep veteran Dan Bakkedahl) the other members of the Joint Chiefs of Staff (played by the likes of Diedrich Bader, Patrick Warburton, Jane Lynch, and Noah Emmerich) are funnier than most of the rest of the show, even if Emmerich's character's name ("General Kick Grabaston") is the funniest thing about him. There's also a small role for comedy legend Fred Willard as Carell's father, who draws some laughs despite (literally) phoning in his performance. Willard passed away earlier this month, and this is billed as his final TV role.

The plots include space adventures, including a bit in the second episode involving a monkey that seems to drag on forever. There’s also intrigue involving possible Russian or Chinese spies, and a visit by Naird to a Biosphere 2-like mock lunar base. But the season has little narrative momentum, with all sorts of promising plots raised then abandoned. Another episode has the characters testifying before Congress, which only reminds us of the time "Veep" did a much better job with the same thing.

It's really surprising how just toothless the political and government stuff on this show is. "Space Force" didn't have to go super-partisan or directly attack the current president, but instead it just does nothing at all. The Congress episode even includes unfunny stand-in characters for Nancy Pelosi and Alexandria Ocasio-Cortez.

There’s been no announcement yet of a second season, although given the buzz a renewal appears likely. But since “Space Force” can't find a way to wring much humor out of the absurdities of government bureaucracy, the way the Iannucci's show or even "Parks and Recreation" could, we can only hope for a huge improvement in future seasons.

All ten episodes of the first season of "Space Force" debut Friday on Netflix.

Does Netflix's The Irishman Reveal What Really Happened To Jimmy Hoffa?