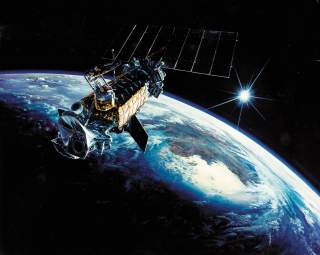 THERE WAS a short but solemn White House Rose Garden ceremony on a warm, late August day in 2019. In attendance was President Donald Trump; his head of the National Space Council, Vice President Mike Pence; Secretary of Defense Mark Esper; and U.S. Air Force General John Raymond. The proceedings were a “big deal,” said the president during his remarks, and a bold, “landmark moment” for America’s armed forces. And with that, the official party stood at attention as Chief Master Sergeant Roger Towberman reverently unfurled a gold crested white flag. General Raymond took charge of America’s 11th combatant command, and after some polite applause from a few onlookers, U.S. Space Command was reborn.

First established in 1982, during the days when President Ronald Reagan dreamt the Strategic Defense Initiative’s lasers would blast Soviet ICBMs from the firmament, Space Command led global space operations in the post-Vietnam era. But in 2002, the Pentagon decommissioned it following a post-9/11 consolidation of responsibilities. The then-unfurling flag, not long after Apollo 11’s fiftieth anniversary, revealed Space Command’s recycled emblem. The future of the Space Force at that moment looked uncertain. America, it seemed, had just taken a giant leap backward.

Looking back as recently as 2018, the times certainly have changed. In March of that year, at San Diego’s Marine Corps Air Station Miramar, President Trump dramatically ordered the Department of Defense (DOD) to establish an independent U.S. Space Force as the sixth branch of America’s military. Invoking the new National Defense Strategy for Space, he declared, “Space is a warfighting domain, just like the air, land, and sea.” Reflecting on her confirmation hearing in 2017, former Secretary of the Air Force Heather Wilson said that one could not even utter “space” and “warfighting” in the same sentence. A fascinating debate played out in the press not long after the president’s announcement. Sadly, it exposed Washington’s boundless parochialism. But it also underscored that our satellites are indeed vulnerable, and that America should do more to defend itself from an attack.

The White House’s push on this front was warranted, more than most Americans might have realized at the time, given advances in China and Russia’s counterspace programs—from hunter-killer spacecraft, to missiles that obliterate satellites in low Earth orbit and high-powered lasers that blind their optics. Old-style “big bus” space systems (so-called because they are the size of city buses) developed by tried-and-true aerospace firms like Lockheed Martin or Boeing are now, as U.S. Strategic Command’s General John Hyten put it, “big, fat, juicy targets.” The Air Force Association (AFA) believes air and space power are inextricably linked—a notion that incongruously harkens back to a bygone era when the Army stubbornly clung to its belief that ground commanders knew how to employ air forces better than Airmen did. Granted, the AFA’s hesitation to embrace the concept of a Space Force should give all servicemembers some pause: its founding implies the most significant reorganization of the U.S. military since President Harry S. Truman signed the National Security Act of 1947. The president’s statement, and the ensuing argument for either side, left Americans nervously wondering if space war was upon us. But, now that the media is atwitter with umpteen hearings and impeachment inquiries, space issues have temporarily faded from view. This does not wipe away the fact that space is still a dangerous place to be, so for just a moment, let us explore why having a separate branch of the military focused solely on it is a vital national interest.

FIRST, WE must return to the beginnings of the U.S. Air Force. The process to establish it began not long after World War I, and it continued for almost three decades. It was a cause championed by pioneering men like General Henry “Hap” Arnold, who muscled the air power agenda through the War Department and influenced legislation like the Air Corps Act of 1929. However, while the Act codified the Army Air Corps and set today’s Air Force on its earliest foundation, the case for Airmen independence was far from a done deal. So, in the waning days of World War II, General Arnold convened a special committee to assess air power’s strengths and weaknesses during the allies’ air campaign against the Third Reich. The result was the United States Strategic Bombing Survey (USSBS)—a massive, 216 volume document that is an exemplar of 1940s “big data,” impressively arrayed with concise bar charts and hand-drawn, three-dimensional graphs. It fully tallied the 1.6 million tons of bombs dropped on Europe over 765,000 bomber runs and 929,000 fighter sorties. The USSBS, in short, is the Air Force’s raison d’être, laying out a strong case why air power should have its own branch of the military.

An equivalent study to justify a U.S. Space Force does not exist. Space-based capabilities for imagery intelligence began in the mid-1950s with the Corona Program, but their existence was a very closely guarded secret until the early 1990s. The National Geospatial Intelligence Agency (NGA—formerly known as the National Photographic Interpretation Center, or NPIC) and the National Reconnaissance Office (NRO), which oversees and develops U.S. satellites, were state secrets until the Clinton administration declassified them. A USSBS-like study to measure how much intelligence these organizations’ satellites produce is an impossible task, but the influence that intelligence has had on global affairs and U.S. strategy—from monitoring Soviet arms control agreements to the discovery of secret nuclear facilities in Iran—cannot be overstated. The machines that generate the nation’s intelligence are obviously well worth an independent Space Force’s protection.

More importantly, now that the nation’s military and economic sectors are so tightly intertwined, the case for a Space Force goes beyond protecting America’s space-based intelligence sensors. While the Global Positioning System (GPS) has been synonymous with precision munitions for many years, it also happens to be how the world and its financial markets keep time. Inside gps satellites lie atomic clocks with either cesium or rubidium cores, which tell time by measuring the minutest oscillations of the elements’ atoms. GPS systems are quite literally the beating heart of our economy, and the slightest variation, or imbalance in it, could cause disastrous consequences to financial transactions worldwide.

What we do have are four different non-partisan commissions funded by American taxpayers over the last two decades—including one headed by former Secretary of Defense Donald Rumsfeld—that basically agree on one thing: a change in the nation’s approach to space is necessary. Leadership inside the space domain is terribly disjointed. The National Aeronautics and Space Administration and DOD are far from the only space operators in the room. An estimated sixty offices claim influence or authority on space-related policy and systems acquisition issues, according to a Government Accountability Office (GAO) report. Secretary Wilson, who prided herself on slimming down Air Force bloat by slashing regulations and revitalizing squadron readiness for combat, appeared predisposed to disentangling this mess. Along with former Secretary of Defense James Mattis, she was rumored to oppose the formation of a “Space Corps,” which would have been headed by a four-star general but controlled by the Department of the Air Force—similar to how the Department of the Navy oversees the Marine Corps. Republicans and Democrats along the way locked horns over what to call the new service. “The Democrats want ‘Corps’ and the gop wants ‘Force,’ said Todd Harrison, director of the Center for Strategic and International Studies’ Aerospace Security Project. “They should just call it the Space Defense Force. That would reassure allies that it’s not about offensive military power or destroying other people’s stuff in space. It’s about defending our national assets from space.”

Some officers with more practical expertise in space matters managed to make their voices heard above the partisan din. “It simply defies logic to keep that domain in the Air Force — akin to having the infantry in the Navy,” wrote Terry Virts, a retired U.S. Air Force colonel and former commander of the International Space Station, in an August 2018 Washington Post editorial. “Air and space are completely unrelated domains, and the equipment, techniques and culture required to operate airplanes are entirely different from those required to launch and operate in space.” It turned out Wilson, an Air Force Academy graduate, had other ideas. A sprawling bureaucracy comes with a Space Force, she said, not to mention an improbably high $13 billion price tag. Wilson resigned her post in May 2019 to become president of the University of Texas at El Paso. As she left the Pentagon behind for the Lone Star state, the former secretary in her resignation letter pledged to be “an Airman for life.”

AS OFFICIAL Washington battles over turf and ties itself in semantic knots, billions in space-based equipment and infrastructure lay vulnerable still. The fact remains it will take an irascible space operator—not an Airman—with Hap Arnold’s skill, charisma and devotion to pull every space organization currently in the DOD, the Executive Office of the President and the Intelligence Community under one roof. While there are generations of Airmen who have advanced from company grade to general officer in the space career’s ranks, only one might someday become the Space Force’s first commandant. This officer will orchestrate the consolidation of active duty, reserve and Air National Guard space resources, bridge the gaps between private sector space launch companies (like SpaceX or Blue Horizon) and the NRO, and possibly assume responsibility over weather squadrons, on top of the National Oceanic and Atmospheric Administration. Moreover, the U.S. Coast Guard saves boaters in danger, but a space search and rescue organization for astronauts or spacecraft in peril is lacking. A Space Force might someday be ideally suited for these missions. Legislation that governs commercial and government conduct in the space frontier is also sorely in need of a refresh. If the 1967 Outer Space Treaty was brought up to the twenty-first century’s reality, the Space Force could help either rewrite or enforce the law.