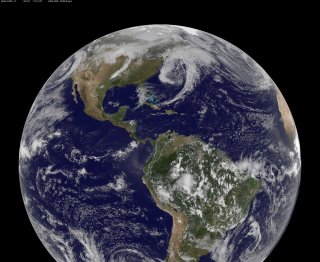 Talk about speaking from the grave. Old data from the now-retired Kepler Space Telescope has uncovered a potentially habitable Earth-size exoplanet located 300 light-years away.

Kepler ran out of fuel and went into sleep mode in 2018, but scientists are still combing through the observations it made during its groundbreaking search for planets far beyond our own solar system. Currently, NASA’s TESS mission is the latest planet-hunter looking for such exoplanets.

According to the study published in The Astrophysical Journal Letters, this exoplanet is known as Kepler-1649c. It is 1.06 times larger than Earth and receives about 75 percent of the amount of light that our planet receives from the sun. These data findings suggest that the exoplanet’s surface temperature could be similar to what is found on Earth.

“This intriguing, distant world gives us even greater hope that a second Earth lies among the stars, waiting to be found,” Thomas Zurbuchen, associate administrator of NASA’s Science Mission Directorate in Washington, said in a statement.

“The data gathered by missions like Kepler and our Transiting Exoplanet Survey Satellite (TESS) will continue to yield amazing discoveries as the science community refines its abilities to look for promising planets year after year.”

Kepler was able to spot 2,681 exoplanets between 2009 and 2018, but Kepler-1649c is the most similar in size compared to Earth. It is also likely located within the habitable zone of its red dwarf star, which means that there is a possibility that liquid water exists on the surface – and perhaps even support life.

Kepler-1649c was initially overlooked because a computer algorithm classified it as a false positive. Like humans, computers can also make mistakes, so researchers part of the Kepler False Positive Working Group took another look at the data.

“Out of all the mislabeled planets we’ve recovered, this one’s particularly exciting – not just because it’s in the habitable zone and Earth-size, but because of how it might interact with this neighboring planet,” Andrew Vanderburg, a researcher at the University of Texas at Austin and first author of the study, said in a statement. “If we hadn’t looked over the algorithm’s work by hand, we would have missed it.”

Kepler-1649c joins the list of other intriguing finds, such as TRAPPIST-1f, TRAPPIST-1D and TOI 700d, in the hunt for habitable exoplanets. Scientists are far from done, however, as there is increasing evidence that such planets are common around red dwarfs.

“The more data we get, the more signs we see pointing to the notion that potentially habitable and Earth-size exoplanets are common around these kinds of stars,” Vanderburg said. “With red dwarfs almost everywhere around our galaxy, and these small, potentially habitable and rocky planets around them, the chance one of them isn’t too different than our Earth looks a bit brighter.”