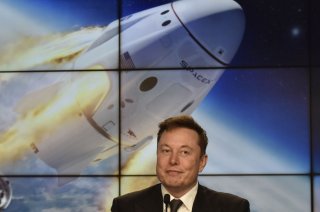 Tesla co-founder Elon Musk has toppled Bill Gates as the world’s second-richest person—which only comes a week after the flamboyant CEO overtook Facebook’s Mark Zuckerberg to become the third richest.

According to the Bloomberg Billionaire Index, which tracks the wealth of the five hundred richest people on the planet, the forty-nine-year-old entrepreneur saw his net worth surge by $7.2 billion to $128 billion on Monday.

Tesla’s shares have been on a tear of late due to its inclusion in the S&P 500 index next month. Morgan Stanley even recently upgraded its stock to “overweight” for the first time since 2017, and Goldman Sachs is anticipating more bullish moves in the price as large-cap mutual funds will soon begin tracking Tesla in the S&P 500, which bodes well for another strong rally.

Last year, Musk predicted that his electric vehicles, which are still very much a work in progress, would boost the company’s market cap to $500 billion. At the time of his prediction, its market cap was sitting under $45 billion.

Musk previously said he would not take any cash salary from Tesla until it hits $100 billion in market cap. He is also known to be a relatively modest spender, often stating that he wouldn’t like to own physical possessions or a home. Musk has already sold two of his mansions in California.

To put in perspective how quickly the stock has risen, Musk was only ranked thirty-fifth in the Billionaire Index in January. His net worth has skyrocketed $100.3 billion just this year—marking the largest increase among all individuals on the index. Roughly three-quarters of Musk’s net worth comes from Tesla shares.

The only person ahead of Musk now is Amazon CEO Jeff Bezos, who garnered the top spot from Gates in 2017. Bezos currently boasts a net worth north of $180 billion.

Musk and Gates have had a sour relationship in recent months, as they have repeatedly disagreed over coronavirus restrictions and electric vehicles. The differences began to ignite when Gates, who has offered praise to Musk for driving forward global electric-car innovation, purchased an electric model from Porsche.

Musk has even resorted to more juvenile displays, calling Gates a “knucklehead” when criticizing his efforts on conducting coronavirus antibody tests.

In addition to his large stake in Tesla, Musk also devotes time to his two other ventures—the space exploration company SpaceX and the infrastructure and construction firm The Boring Company.