E.T., Clueless and Two Flavors of Hannibal: The Best of What’s Coming to Netflix in June 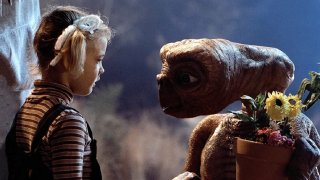 Lockdowns are beginning to lift in the United States, and more relaxations of restrictions are expected in June. Even so, most of us are likely to be spending more time at home this year than we do in a typical June. Luckily, there’s plenty of new stuff coming to Netflix over the course of the month:

- “Clueless” (June 1) Just in time for its 25th anniversary, Amy Heckerling’s 1995 film that set Jane Austen’s “Emma” in a Southern California high school hits Netflix the first of the month. Starring Alicia Silverstone and a talented cast that included a young Paul Rudd, “Clueless” was the best of the 1990s’ series of literary adaptations that were set in modern times.

- “E.T.: The Extra Terrestrial” (June 1.) One of Netflix’s most popular shows, “Stranger Things,” lifted many of its ideas from 1982’s “E.T.,” and now the real thing comes to Netflix. Steven Spielberg’s film about the friendship between a young boy and an alien still brings guaranteed tears just like it did nearly 40 years ago.

- “Walk Hard: The Dewey Cox Story” (June 1.) Director Jake Kasdan’s 2007 film was such a perfect parody of the music biopic genre that even movies that were produced a decade afterward, like “Bohemian Rhapsody,” unconsciously used its beats. Starring John C. Reilly in the title role and a cast of thousands, “Walk Hard” also featured a suite of fine original songs.

- “The Disaster Artist” (June 1.) Director James Franco’s film about Tommy Wiseau’s legendarily bad movie “The Room” is both consistently hilarious and a lovely homage to the midnight movie cult that has formed around Wiseau’s notorious movie, featuring committed performances from Franco and his brother Dave.

- “Silence of the Lambs” (June 1.) Jonathan Demme’s 1991 adaptation of Thomas Harris’ novel was one of the best films of the 1990s and was the last movie to sweep Oscars for Best Picture, Director, Actor, Actress and Screenplay. Starring Jodie Foster and Anthony Hopkins as a young FBI agent and the imprisoned serial killer she consults, “Silence of the Lambs” may be gross at points, but it’s one of horror’s greatest achievements.

- “Zodiac” (June 1.) Speaking of serial killers, David Fincher’s 2007 film about the Zodiac Killer mystery may not have been a big box office hit upon its initial release, but it’s gained a reputation over the years as one of the more acclaimed films of the new century. Starring Jake Gyllenhaal, Mark Ruffalo and Robert Downey, Jr. “Zodiac” doesn’t solve the mystery of who committed the Zodiac murders, but it is one of the best movies ever made about journalism, investigations, and serial killers.

- “13 Reasons Why” (Season 4, June 5.) The controversial series, based on Jay Asher’s young adult novel, was originally considered a limited series, but it has continued to be renewed, and it returns for its final season. The new season will consist of 10 episodes, while all of the others were 13.

- “Hannibal” (June 5.) Four days after the Netflix arrival of “Silence of Lambs” comes another acclaimed adaptation of Thomas Harris’ Hannibal Lechter novels. “Hannibal,” the TV adaptation of Harris’ work that ran for three seasons on NBC, starred Mads Mikkelson as Lechter and Hugh Dancy as FBI agent Will Graham, and was one of the more graphically violent shows ever to air on network TV.

- “Da Five Bloods” (June 12.) Spike Lee finally won his first-ever competitive Oscar two years ago for “Blackkklansman,” and his first new film since then is a Netflix debut. Another period piece, the film tells the story of four African-American Vietnam veterans who go back to Vietnam to both find the remains of their fallen commander and to discover a treasure. “Da Five Bloods” stars Delroy Lindo, Jonathan Majors, Clarke Peters, Isiah Whitlock, Jr., and Chadwick Boseman.

- “Wasp Network” (June 19.) Directed by the acclaimed French filmmaker Olivier Assayas (“Personal Shopper”) the film, based on Fernando Morais‘ book “The Last Soldiers on the Cold War, tells the story of Cuban spies in the U.S. during the 1990s. The film stars Penelope Cruz, Edgar Ramirez, Gael Garcia Bernal and Ana de Armas.