Facebook is Now ‘Meta’ (Everything Else is the Same) 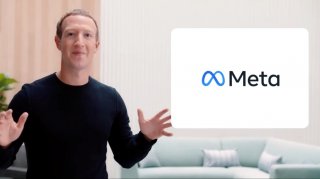 Following weeks of rumors, Facebook has rebranded itself as “Meta,” expanding its identity beyond the flagship social network that has come under increased scrutiny for its alleged reluctance to filter extreme or toxic content.

CEO Mark Zuckerberg hailed the move as a shift towards the creation of a “metaverse,” an augmented virtual reality in which people can interact with each other, both for business and for entertainment.

“The metaverse is the next frontier,” Zuckerberg announced at Facebook’s virtual Connect conference on Thursday. “From now on, we’re going to be metaverse-first, not Facebook-first.”

Zuckerberg justified the name change on the basis that the company’s brand was closely linked to “one product that can’t possibly represent everything we’re doing today, let alone in the future.” Another reason he cited for the changes was the company’s attempt to refocus on young adults, who have increasingly begun to use competitor apps such as ByteDance’s TikTok.

Left unmentioned was Facebook’s ongoing public relations problem, made acute by the release of thousands of internal company documents by whistleblower Frances Haugen to the U.S. Securities and Exchange Commission. While the company has argued that selecting a small subset of its internal discussions amounts to cherry-picking, the revelations in the leaks have led to a media firestorm and prompted a congressional investigation.

Another concern for the company’s future regards user privacy and the extent to which services such as Facebook and Google collect, log, and sell users’ information. Zuckerberg promised that the future “metaverse” would have full disclosure about its data use, a feature that Facebook has substantially lacked.

Zuckerberg confirmed that the name change would not affect any of the company’s day-to-day operations.

While the company’s vision for the ‘metaverse’ will not be achievable for some time, it has already begun marketing virtual-reality (VR) technology, including its Oculus VR headsets. Meta announced that its investments in its VR division, now known as “Reality Labs,” would cost the company around $10 billion in operating profit.

Facebook, which will remain the company’s flagship service, is now used by around 3 billion people worldwide, more than one-third of the global population. In terms of market capitalization, it is estimated to be the sixth-most valuable company in the world, with revenue of nearly $120 billion. The company also owns the popular image-sharing platform Instagram and messaging service WhatsApp.