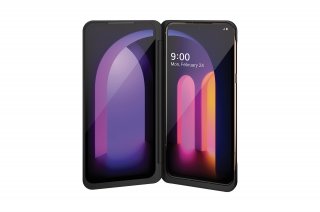 Smartphone manufacturers have done all sorts of unique things with the features and form factors of the devices over the last few years. The next frontier? Rollable phones.

While Samsung and other manufacturers are brought out foldable smartphones, TCL earlier this year debuted a concept for a rollable OLED phone which, per Android Authority, "gives the impression that the phone is expanding out of nothing." But that phone was merely a concept which won’t be released anytime in the near future and, per that report, TCL's working prototype got stuck in, of all places, Wuhan, China, which prevented its planned shipment to the U.S.

Now, another manufacturer says it's not only working on a rollable smartphone device, but plans to release it to the public next year.

According to OLED Info, LG's CEO Kwon Bong-seok says the company plans to release a rollable smartphone, as early as the start of 2021. The company is using panels from BOE, rather than from LG Display, according to the report. This would make them the first company ever to actually release such a product.

BOE was reportedly set to join the ranks of suppliers for Apple's iPhone screens this year, but reports last week stated that the Chinese company will not in fact be on the supplier list, at least for the original batch of 2020 iPhones, with Apple instead utilizing panels from Samsung and LG Display.

LG has already been making rollable OLED TVs, including the 65RX OLED TV, which is priced at around $60,000. LG had introduced its first rollable TV at CES in January of 2019, where it was one of the more acclaimed products to appear.

Research firm IHS Markit, released earlier this spring, predicted that 100,000 rollable OLED displays (of all sizes and applications) will ship in 2022, jumping to 1.3 million by 2026, which even then will only represent a small niche of the overall OLED market. Foldable OLEDs, however, will be a larger share.