Forget Top Gun 2: Tom Cruise and Elon Musk Want to Do a Movie in Space 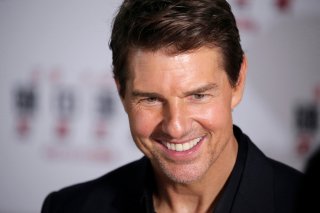 If you thought the film “Top Gun” had some serious altitude, you better now set your sights even higher.

That’s because Hollywood megastar Tom Cruise and Elon Musk’s SpaceX are working on an out-of-this-world project with NASA to shoot a movie on the International Space Station, a multibillion-dollar laboratory that orbits about 250 miles above Earth.

In a tweet, NASA administrator Jim Bridenstine confirmed the news: “NASA is excited to work with Tom Cruise on a film aboard the Space Station!” he wrote. “We need popular media to inspire a new generation of engineers and scientists to make NASA’s ambitious plans a reality.”

In response to Bridenstine’s tweet, Musk wrote that the venture “should be a lot of fun!” It is still unclear as to how much Musk will be involved in the film-production process.

The project is still considered to be in the early stages, and no film studio has officially jumped on board yet.

Cruise is no stranger to taking daring risks while making his highly successful action movies. He scaled the world’s tallest building, the 2,700-foot-tall Burj Khalifa in Dubai, for the 2011 film “Mission: Impossible—Ghost Protocol.”

Several films already have been shot on the ISS, including the 2002 IMAX documentary “Space Station 3D,” which was narrated by Cruise. The 2012 sci-fi movie “Apogee of Fear” was also filmed in space by entrepreneur and space tourist Richard Garriott, the son of an astronaut.

Last year, NASA issued a directive that laid out plans to allow non-government individuals to pay the space agency to use the International Space Station’s facilities.

Those who want to participate in the commercial use of NASA’s amenities are required to pay up hefty sums first. The use of life-support equipment and the toilet were listed at $11,250 per day and crew supplies at $22,500 per day.

The ISS was originally built as a partnership among dozens of countries, but the U.S. and Russia are its primary operators. Maintaining the U.S. part of the orbiting laboratory costs taxpayers between $3 billion and $4 billion annually.

Since 2000, rotating crews of astronauts and cosmonauts have lived aboard the ISS on a continuous basis. Several well-heeled space tourists have visited the station over the years as well.