Get Ready: LG Debuts New Soundbars, Some With Dolby Atmos and DTS:X 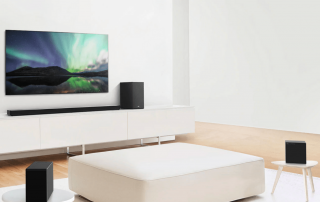 LG Electronics, last December, announced the impending arrival of a new line of soundbars, which continued the company’s partnership with Meridian. The soundbars were shown at CES in January, where two of them, the LG SN11RG and SN9YG, were winners of CES Innovation Awards.

Now, the soundbar line has reached the market, with pricing announced.

The products are all meant to work with LG’s latest TVs, including the OLED and NanoCell lines.

The SN11RG and SN10YG models, along with three others—the SN9YG, SN8YG & SN7Y—offer Dolby Atmos and DTS-X capability, as well as HiRes Audio, and it all delivers Meridian Audio’s Bass and Space and Image Elevation technology.

That SN11RG flagship retails for $1,699 and is available in May.

“LG’s stunning flagship soundbar, SN11RG offers the ultimate 3D surround thanks to an impressive 770W of power and 7.1.4 channels,” CES said in honoring the SN11RG soundbar in the Smart Home category.

Sony, earlier this month, released its own soundbar that features both Dolby Atmos and DTS:X functionality, along with some new wireless speakers. That product also debuted at CES in January.

CNET, in its rankings of the best soundbars that were published last week, did not list LG’s model. The Vizio SB3621n-E8 was chosen as the “Best soundbar for the money,” while another Vizio product, the SB36512-F6, was named best budget Atmos soundbar. While Creative Stage took the honor for “best soundbar under $100.”