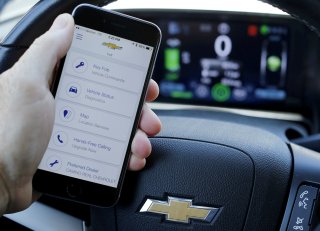 Over time, the way that people listen to music in the car has changed dramatically. Long gone are the days of compact disc (CD) changers and even, in most cases, CD players themselves. Apple’s CarPlay and Google’s Android Auto have made it much easier for drivers to listen to music, podcasts, and other entertainment straight from their phones.

Most car manufacturers are in some phase of the process of getting rid of CD players, and now the General Motors website GM Authority is reporting that no cars in GM’s 2022 model year lineup of passenger vehicles will offer CD players.

As of last year, per the report, the only GM cars that still offered CD players were the Chevy Express van and the GMC Savana. But even those only offered the CD player as an option. Several GM models from 2021, including the Chevy Tahoe, Chevy Suburban, GMC Yukon, GMC Yukon XL and Cadillac Escalade, had newly discontinued the CD player option.

“It is now overwhelmingly common for a vehicle to be able to play music stored on a smartphone through Bluetooth, Apple CarPlay, Android Auto or even a simple USB cable, although this is cold comfort to anyone who does not have a smartphone, but does have a CD collection,” the GM Authority story said. “Of course, it’s possible to transfer many CDs’ worth of music on to a single memory stick, but this is more appealing to some people than others.”

CDs, of course, have been in serious decline for the last several years, and they seem unlikely to get a revival the way that vinyl records have. In fact, vinyl records outsold CDs in the first half of 2020, according to data released at the time by the Recording Industry Association of America (RIAA.) It was the first time since the 1980s that more records were sold than CDs, although both remain far behind digital music when it comes to sales and usage. Physical media, in fact, took up just 7 percent of revenues in the industry.

At the “virtual” CES in January, GM showed a first look at what it called the first “flying Cadillac.” It was an animated simulation of what technology might one day look like, and the reality of such a thing is almost certainly many years away.

“We are preparing for a world where advances in electric and autonomous technology make personal air travel possible,” General Motors’ VP of Global Design, Michael Simcoe, said in that CES keynote.