HBO’s Game of Thrones Spinoff Gets a Teaser 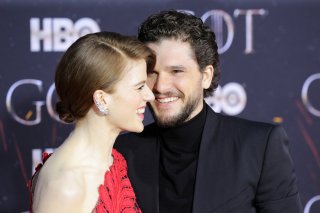 In late 2019, HBO made it official that a Game of Thrones spinoff series was on the way. The show is called House of the Dragon, and it’s based on Song of Ice and Fire creator George R. R. Martin’s 2018 novel Fire & Blood. The new show will be set many years before the events of Game of Thrones, and will focus on an earlier era of the Targaryen dynasty.

The cast includes Olivia Cooke, who plays Queen Alicent Hightower on the show, and the cast also includes Paddy Considine as Viserys I Targaryen, Emma D’Arcy as Rhaenyra Targaryen, Matt Smith as Daemon Targaryen, and Rhys Ifans as Otto Hightower. Martin and Ryan J. Condal are listed as the show’s creators, with Game of Thrones showrunners David Benioff and D. B. Weiss not involved with the series at all.

Now, HBO has unveiled the longest look to date at House of the Dragon, in what it’s calling an “official teaser.” Lasting more than a minute, the teaser features a few things long associated with the Targaryens- dragons, fire, and people with long golden hair. There are also plenty of other sights familiar to Game of Thrones fans, including swordplay, ornate palaces, the Iron Throne, and a battle over who gets to sit on it next.

There is no official release date included in the teaser, except for “2022,” which was known as the debut year for the new series already. The clip also emphasizes that the show is on HBO Max, as opposed to just HBO.

HBO, around the time Game of Thrones ended, had commissioned several ideas for spinoff series, drown from other parts of Martin’s written mythology. One, set to star Naomi Watts, even moved forward with a pilot, before HBO moved ahead with House of the Dragon instead. It’s not clear if there are still plans for additional spinoffs.

While not many fans of Game of Thrones were particularly happy with how the show ended, it was among the most popular series on television for a considerable period of time, leading lists of both the most-watched and most-pirated content. Depending on when the new series arrives, around three years will have passed between the finale of the original show and the debut of the new one, meaning that some of the sour taste may have dissipated by then.

The new series will arrive in a landscape with a great deal more competition than Game of Thrones faced when it debuted in 2012. The original Game of Thrones show was one of the last shows to appeal to a monoculture, and thriving in that era might be its successor’s biggest challenge.