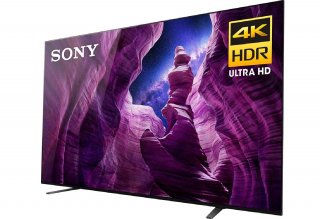 Sony unveiled a new TV lineup at CES in January and announced pricing and release dates for those products last month. Now, the company’s A8H 4K OLED TVs are hitting the market.

The TVs feature Sony’s X-Motion Clarity technology and 2.1 channel sound, and are compatible with Alexa, Apple HomeKit, Google Assistant and AirPlay 2. It runs on Android TV and is Dolby Atmos-capable. The models also come with a two-way stand, and can be raised to make room for a sound bar.

In a hands-on when the TVs were introduced at CES, Tech Radar praised the line’s “gorgeous 4K HDR performance,” the X-Motion Clarity technology and “ambient optimization,” while listing as drawbacks its “bulky design,” while noting that it’s “not as bright as other OLEDs.”

“The A8H has a couple of significant tricks up its sleeves that potentially make it comfortably Sony’s most all-round appealing OLED TV yet,” the site wrote. “Especially if it turns out that, as we suspect, it’ll be pretty aggressively priced when it goes on sale in the next few months.”

“The A8H looks superb, thanks to the combination of an excellent OLED panel and Sony’s X1 Ultimate processor. The display pairs the deep contrast and true blacks of OLED displays with 180-degree viewing angles and Sony’s Triluminos color enhancement,” Tom’s Guide, which will publish a full review at a later date, said.

The new TVs are available from Best Buy, Amazon and other retailers.