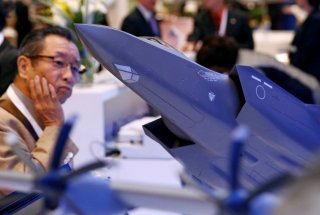 The U.S. Department of Defense’s declassification of three UFO videos has provoked a variety of interesting reactions from commentators, UFO enthusiasts, and the general public. But one of the biggest surprises came when the Japanese Minister of Defense (JSDF), Taro Kuno, revealed in a 28 April press conference that the JSDF did not have any response procedure for an encounter with a UFO, and that they were going to prepare one in light of the recent footage.

Kuno prefaced his statements with the remark that no JSDF pilot had ever encountered a UFO before. This statement is odd, considering that UFO sightings by other military pilots are fairly commonplace, and JSDF pilots are fairly active, flying intercept, patrol, and training missions on a regular basis. The statement is disputed by some UFO research groups in Japan, who say Japanese military pilots have reported UFOs to their superiors but were only met with ridicule.

Kuno also said he would like to hear the intention and analysis behind the United States’ release of UFO videos. According to official DoD statements, the videos were released to eliminate any doubt of their veracity, and because they were confirmed not to be involved with any ongoing investigations or contain any footage of secret U.S. projects. However, the videos were released with little additional comment, simply that the objects remained unidentified. Kuno’s statement could be a request for more information to aid the JSDF’s developing response procedures.

The JSDF’s initiation of the creation of a response procedure could also be happening for very mundane reasons. As China steps up development of new indigenous weapons, it could be possible that JSDF aircraft encounter them while on patrol. Standardized procedures on how to capture footage of UFOs could lead to important data on adversary capabilities, and a streamlined pipeline for classifying them could lead to identification of objects that were formerly blown off as UFOs.

Modern technology has also allowed for far better capture and analysis of UFO footage, which makes formal analysis and handling of footage more viable. In the past, UFO documentation primarily came from hand-stabilized video or pictures, or interviews of pilots that encountered them. But modern planes often carry stabilized high-power cameras in targeting pods, which can capture photos and videos in visual, thermal infrared, and regular infrared spectrums. Said pods can also track slew rates and measure distances with laser rangefinders, which can allow for accurate calculation of flight characteristics of UFOs. The released DoD videos were taken with such devices, and are significantly more clear than most previous videos of UFOs. While targeting pods are not as common in the JSDF as they are in the US Military, the JSDF does possess relevant numbers of them.

Thus the JSDF’s decision to create a response procedure for UFOs probably comes from very practical motives: the combination of increasingly technologically advanced neighbors and modern sensor technology has allowed for capture of footage of UFOs to be properly analyzed for data, which could prove to be of intelligence value. The decision is probably long overdue, and Kuno has capitalized on the recent footage release to jumpstart or reveal the JSDF’s initiative.