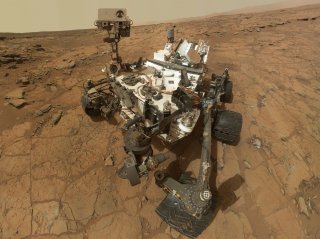 Talk about telecommuting to the extreme. As millions of Americans have been forced to work remotely amid the COVID-19 pandemic, NASA staff members are also feeling the pain.

But what if the job entails you to control a robotic rover roughly 140 million miles from Earth? Well, apparently, you just have to make do.

NASA scientists and engineers are doing their best, despite what’s happening all across the globe, to still send timely commands to the car-sized Curiosity rover that’s currently exploring the surface of Mars. Amazingly, the hardworking team is completing all of its tasks from the relative comfort of their homes.

That includes writing computer code to program the rover’s specific actions on the Red Planet, sequence by sequence, all the while conducting experiments with materials that Curiosity collects.

On more typical days, the Curiosity team members are physically at NASA’s Jet Propulsion Laboratory in California. The lab boasts several computers that can beam important commands directly to the rover, collect data and receive images.

One of the first commands sent, shortly after setting up to work remotely, was making the rover drill into a rock sample. It proved to be a success.

However, there are still certain tasks that must be done on-site.

“Not everything they’re used to working with at JPL could be sent home, however,” NASA said in a press release. “Planners rely on 3D images from Mars and usually study them through special goggles that rapidly shift between left- and right-eye views to better reveal the contours of the landscape. That helps them figure out where to drive Curiosity and how far they can extend its robotic arm.”

The high-tech equipment is available to the staff, but none have computers powerful enough to run such programs at home.

“We’re usually all in one room, sharing screens, images and data,” Alicia Allbaugh, who leads the Curiosity team, said in a statement. “People are talking in small groups and to each other from across the room.”

To compensate, the staff members often have to message one another via apps and hold several video conference calls simultaneously.

Despite the dramatic change of office scenery, the team is finding ways to accomplish all of its necessary tasks.