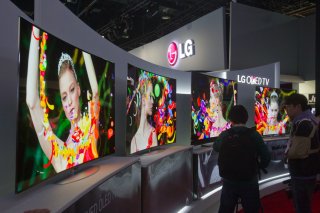 LG Electronics is the company that makes the world’s most acclaimed OLED TVs. RTINGS.com's rankings of the best TVs available on the market are dominated by LG OLED models, which take up the top five spots. LG’s G1 OLED is the top model listed, followed by LG’s CX OLED TV from 2020, the 2021 LG C1 OLED, the 2020 LG GX OLED, and the LG B1 OLED, also from 2021.

There's more to come from LG at the Consumer Electronics Show (CES) next month, with Flat Panels HD reporting earlier this month that the 2022 OLED model will include the LG C2, which will serve as the successor to the C1, and the G2 replacing the G1 as the top “Evo” model. There will also be TVs called the A2 and B2.

LG Display and LG Electronics are two separate companies, although LG Display makes the displays for LG Electronics’ TVs. LG Display has been known for introducing wild TV concepts at past CES events, including a rollable model, the LG OLED R, that was unveiled at CES in 2020 and arrived on the market this year. The Korean publication Korea JoongAng Daily reported this summer that the 65-inch version of rollable TV had sold just ten units as of the time of publication. It does cost $87,000, so the TV was never likely to be a huge seller.

And LG Display, according to a report this week, has some more out-there concepts on tap for CES next year.

According to the Verge, LG Display at CESs will debut the “Media Chair,” which is described as "a rotating curved 55-inch OLED TV attached to a reclining slice of chair that positions you at the sweet spot of those pixels.”

The Media Chair, the Verge is clear, is more a concept than a product at this stage, although the company is looking to partner with a massage chair company to eventually bring it to market.

LG Display, at CES, is also planning to unveil the "Virtual Ride” which, per the Verge, “uses three 55-inch curved 4K OLED screens to create a single giant wrap-overhead display to theoretically feel like you’re cycling outdoors.” It’s like a Peloton screen that goes above the rider’s head.

With CES less than two weeks away, some exhibitors have been announcing their withdrawal due to Omicron variant fears, with T-Mobile, AT&T, Facebook/Meta,s and Amazon among those declining to participate in the show in-person. The organizers, however, have held firm on their plans to go ahead with the live show. The organizers are requiring proof of vaccination, as well as masking, and are making COVID-19 tests available to all attendees.