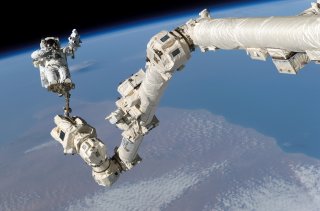 Researchers have discovered that long-duration spaceflight missions do in fact cause permanent changes in the brains of astronauts.

According to a recent study published in the journal Radiology, these changes are more specifically due to increased brain volume and deformities within the pituitary gland, which is a tiny structure at the base of the skull that is responsible for the bodily functions of multiple glands.

Eleven astronauts – 10 men and one woman – took part in the study before and after long-term spaceflight missions on the International Space Station. The participants had brain MRIs taken before their flights, one day after returning from the station and then several more times over the course of the next year.

Five of the participating astronauts had previous experience with spaceflights, while the rest had none. The astronauts’ average time spent in space averaged out to 171 days.

According to the MRI results, researchers observed that the brain and cerebrospinal fluid volumes in the astronauts expanded by 2 percent. Cerebrospinal fluids, which enrich and protect the brain, are usually found in and around the spinal cord and the cavities of the brain. Even after a year after these findings, the increases still remained, and that duration suggests that these effects could be permanent.

These fluid changes are comparable to patients with hydrocephalus. People with this condition can have dementia, trouble walking or issues with bladder control.

Even before this particular study pinpointing the physiological changes that could occur, astronauts on long-term missions aboard the space station have long complained about what is known as neuro-ocular syndrome.

The upward shift of blood that astronauts must deal with in zero gravity creates more pressure in the head area, and this phenomenon has been the major cause of vision problems in more than half of the astronauts who have lived and worked on the space station for extended periods.

After returning to Earth, medical examinations on the astronauts have revealed swelling of the optic nerve, retinal bleeding and fluffy white patches on the retina, among other changes.

The astronauts also experienced reverse blood flow and blood clots on the station, and six of the study participants showed signs of deformities on the pituitary gland, likely caused by elevated intracranial pressure.

NASA is indeed eager to garner more data on how extended space travel affects the human body. The current six-month stays on the space station will eventually give way to longer missions, such as NASA’s Artemis program that aims to return humans to the moon by the year 2024. The next undertaking after that will likely be sending humans to explore the surface of Mars.

The researchers acknowledged that this study only included a small number of astronauts, and therefore, more intensive research needs to be done in the future.