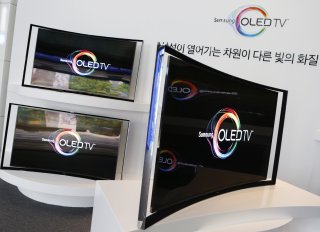 Samsung has been known for a couple of years to be planning a new type of panel technology, for use in its TVs, called QD-OLED. The idea is to combine the best of OLED technology with the QLED format that Samsung has been using over the past few years for its high-end TVs.

The first QD-OLED models are expected to be unveiled at CES in Las Vegas next month—and now a report says that Samsung has officially begun mass production of them.

Samsung Display last week hosted a ceremony to “celebrate mass-production of Quantum Dot (QD) display OLED panels,” according to the English-language publication The Dong-A Ilbo. Production is happening at the Q1 Line at Asan Campus in South Chungcheong Province. It started about two years after Samsung announced the investment of 13.1 trillion won (about $11 billion) in the new technology.

Nikkei Asia also reported about the start of large-scale production at the facility, stating that the celebration was also for the first shipment of product from the facility.

That report positioned Samsung’s new plant as a part of a continuing competition with LG Display, its Korean rival, which currently holds 80 percent of the market in large OLED panels, which are the size used to make TVs. That report also indicated that some other TV manufacturers, including Sony, might purchase the QD-OLED TVs.

Meanwhile, the previous technology, LCDs, is now beginning to be dominated by such Chinese manufacturers as TCL and BOE, which are “transforming displays into a commodity rather than a product where makers can stand apart on the strength of their technology.”

In addition, a report by The Elec in early December stated that Samsung, to supplement its 2022 TV lineup, will be purchasing some OLED panels from LG Display.

“According to the provisional plan, Samsung Electronics will receive 2 million W-OLED panels from LG Display and ship 1.5 million W-OLED TVs,” the Elec report said. “W-OLED” means “white OLED,” which is made only by LG Display.

That would contradict a strong denial earlier this year from a Samsung executive that the company had any interest in buying OLED panels.

“There is no change in the idea that our QLED TVs have better picture quality than OLED TVs. I’m trying to make it clear that the rumors are groundless. It is true that LCD prices are rising, and we are facing a difficult situation, but we have enough capacity to overcome as a No. 1 company,” SamMobile reported.

If the reports are true, then Samsung will use three different formats for its high-end TVs in the 2022 lineup: Neo QLED, QD-OLED and regular OLED.