The Meat Ransomware Attack Has Russian Fingerprints All Over It 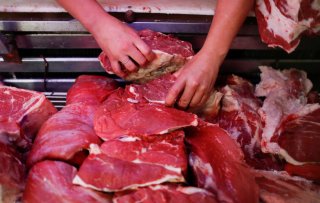 Just a couple of weeks after a ransomware attack led to the shutdown of one of the most important oil pipelines in the U.S., there’s been another ransomware attack affecting a major U.S. industry, this time meat.

The attack took place earlier this week, and the FBI has attributed it to a Russian ransomware gang called REvil, also known as Sodinokibi. This is not the same group that was responsible for the Colonial Pipeline attack; that was Darkside.

“We have attributed the JBS attack to REvil and Sodinokibi and are working diligently to bring the threat actors to justice,” the FBI said in a statement Wednesday. "We continue to focus our efforts on imposing risk and consequences and holding the responsible cyber actors accountable. Our private sector partnerships are essential to responding quickly when a cyber intrusion occurs and providing support to victims affected by our cyber adversaries.”

Ars Technica describes REvil as “ransomware’s most cut-throat gang.” It states that the group is known for “the cruelty of its tactics, which are designed to exert maximum pressure on victims.” REvil was also responsible for the hack of Grubman, Shire, Meiselas & Sacks, a law firm that’s known for representing numerous major celebrities.

REvil, per Engadget, has not claimed responsibility for the attack.

The attack affected JBS USA, although the company has announced that they’re on track to resume production Thursday.

“JBS USA and Pilgrim's continue to make significant progress in restoring our IT systems and returning to business as usual,”  Andre Nogueira, JBS USA’s CEO, said in a press release Thursday.

It’s not clear whether or not JBS agreed to pay the ransom. It’s also not clear what role, if any, the Russian state played in the attack.

Fox News senior strategic analyst and retired Army Gen. Jack Keane told that network that the JBS attack should be seen as an attack by the Russian government.

"What is really happening here which is something the country has to come to grips here, particularly the government in dealing with this and also educate the American people, that Russia and our adversaries are conducting massive cyber-warfare campaigns to undermine Western democracies and disrupt the institutions in those democracies and the people's confidence in them with a particular focus on the United States," Keane said on television Wednesday.

Even prior to the ransomware incident, there were reports of meat shortages this spring, per NBC Bay Area,  a shortage that was attributed to “labor shortages, high fuel costs, [and] the drought,” as well as the cyberattack.