Meet the Air Dream: The Next Big Thing in Electric Cars 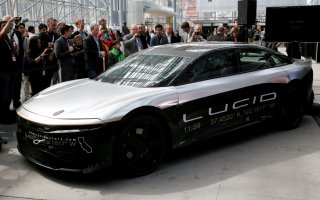 Lucid Motors, the electric car company based in California, is known to have been working on the next big electric car, with the car’s arrival likely not that far away.

The company, formerly known as Atieva, got its start as a producer of batteries for other electric cars but has since pivoted to making its own models.

The Lucid Air will be the first car to arrive from the company.

“Our [Air] reservations have just exceeded 10,000,” the CEO, Peter Rawlinson, told Yahoo Finance, from Lucid’s just-opened New York City studio back in July. “They are bona fide reservations with appropriate deposits. Some people have even paid over a $7,000 deposit.”

Now, Lucid has announced more about its rollout plans.

“As a technology company, we seek to exceed expectations and this is clearly evident with our Lucid Air Dream Edition Performance and Range variants,” said Rawlinson said in the press release. “I’m delighted to provide our Dream Edition customers with this additional choice and breadth of capabilities.”

Earlier this week, the 2022 Lucid Air Dream Edition got its first drive with the media, as MotorTrend took it for a spin.

“The Lucid Air Dream Edition R reminds me of a Nissan GT-R, especially one of the NISMO GT-Rs. The Air's handling is the big surprise. You know a 933-hp car will be quick, and I'd ridden around Laguna Seca in an Air before, so I knew how ridiculously quick the Air is, and how lovely its interior is,” the MotorTrend writer said. He also praised the car’s interior, comparing it favorably to that of Tesla’s cars.

“I even knew Lucid's 500-mile-or-more range claim was legit. I assumed the Air Dream Edition R would be decent enough to drive around big sweepers, but about ten miles into our run-up Angeles Crest Highway, I discovered the car enjoyed being manhandled through tight corners. The harder I pushed, the better the Lucid Air got. It leaps and bounds out of corners, much like the way a NISMO GT-R behaves. The "throttle" pedal unleashes a tsunami of thrust that the smart all-wheel-drive system takes full advantage of—When you're mostly pointed straight, the Air is mostly rear-wheel drive.”