Moonstruck, Christopher Guest and Beyond the Valley of the Dolls: The Best of What's Coming to Hulu in July 2020 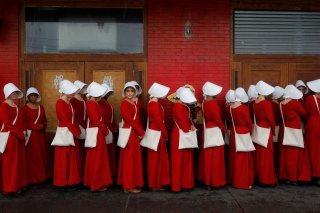 Hulu had a pretty big spring, launching its new FX on Hulu imprint and with it such acclaimed series as “Devs” and “Mrs. America,” while also finding a hit in Lil Dickey’s sitcom “Dave.” In July, Hulu is getting a huge influx of new and old movies.

“Beyond the Valley of the Dolls” (July 1.) This 1970 cult movie from schlock master Russ Meyer is one of the craziest movies ever made—and it was co-written by none other than the great film critic Roger Ebert. You’ll see things in this movie that you’ve never seen in a movie before.

“The Color Purple” (July 1.) Steven Spielberg’s 1985 film, based on the novel by Alice Walker, told the story of a group of African-American women in the early 20th century, with a cast that included Whoopi Goldberg, Oprah Winfrey, Danny Glover and Rae Dawn Chong.

“Grizzly Man” (July 1.) Werner Herzog’s 2005 documentary is one of the best nonfiction films of the new century. It tells the story of Timothy Treadwell, a man who went every year to live in Alaska with the grizzly bears, and ended up eaten by them.

“Moonstruck” (July 1.) Snap out of it! This beloved 1987 film, directed by Norman Jewison, tells the story of love between Italian-Americans played by Cher and Nicholas Cage. The film also stars Danny Aiello and Olympia Dukakis; Cher and Dukakis both won Oscars.

“The Trip” movies (July 1) “The Trip” began as a TV series, about Steve Coogan and Rob Brydon traveling around as fictionalized versions of themselves. Later edited into a movie by director Michael Winterbottom, it was released in 2010, and followed by three sequels, including “The Trip to Italy” in 2014, “The Trip to Spain” in 2016, and “The Trip to Greece” earlier this year. The first three hit Hulu the first of the month.

“Waiting For Guffman,” “Best in Show,” “A Mighty Wind” and “For Your Consideration” (July 1.) Throughout the late ‘90s and early 2000s, director Christopher Guest made a series of satirical mockumentary films, with the same general company of actors, led by Eugene Levy, Catherine O’Hara, Guest himself, John Michael Higgins and others. “Waiting For Guffman” (1996) was about small-town theater ambition, “Best in Show” (2002) about dog shows, “A Mighty Wind” (2003) about aging folk singers and “For Your Consideration” (2006) about Oscar-grubbing. All hit Hulu at the start of July.

“The Whistlers” (July 2.) A Romanian crime film directed by Corneliu Porumboiu that was a hit on the festival circuit last year, and nominated for Best International Feature Film at the Oscars, the plot involves a detective having to learn “El Silbo,” a whistling-inflected language, in order to solve a crime.

“Palm Springs” (July 10.) This buzzed-about film from January’s Sundance Film Festival stars Andy Samberg and Cristin Milioti (the mother from “How I Met Your Mother.”) The two play wedding guests who end up in a “Groundhog Day”-type scenario.

“The Assistant” (July 20.) An acclaimed indie movie from earlier this year, “The Assistant” stars Julia Garner, from “Ozark,” as a woman who works as an assistant to a Harvey Weinstein-like mogul. Directed by Kitty Green, the film is set over the course of a single day.