The 'Most Affordable iPhone' Is Here: iPhone SE Has Arrived 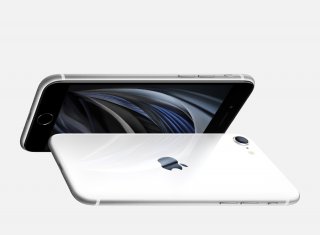 It was rumored for weeks, including all sorts of reports about exactly what day it might appear. But now, the new iPhone SE is finally official.

Apple officially announced the new, midyear iPhone on Wednesday morning. Pitched as "the most affordable iPhone," the new phone features a 4.7-inch Retina HD display and a single camera, and is priced starting at just $399, significantly less than the company's higher-end iPhone models.

The new iPhone will be available for preorder on April 17 and actual sales on April 24. It's being offered with available colors including black, white and red, and in sizes that include 64GB, 128GB and 256GB. But with all Apple Stores closed until at least early May, the company will need to rely on e-commerce sales for the new item.

Rumors had stated that the phone might be called the iPhone 9, but Apple went with the SE naming convention. An accessory manufacturer, in early April, had accidentally leaked a screen protector product that was listed as compatible with the SE.

Apple's deal in which it offers a free year of its Apple TV+ streaming service to customers purchasing its devices will apply to the iPhone SE, the company's announcement said. Apple will also donate a portion of proceeds from those purchasing the (PRODUCT)RED edition to the Global Fund's COVID-19 Response.

This is not the first iPhone to use the "SE" name. The first arrived in 2016, also in the spring, with "SE" standing for "Special Edition." A larger-capacity re-release followed in the spring of 2017.

"The first iPhone SE was a hit with many customers who loved its unique combination of small size, high-end performance and affordable price; the new second-generation iPhone SE builds on that great idea and improves on it in every way — including our best-ever single-camera system for great photos and videos — while still being very affordable,” Phil Schiller, Apple’s senior vice president of Worldwide Marketing, said in Apple's press release.

The SE, intriguingly, includes the Home button, which was abandoned by Apple in favor of FaceID in its higher-end iPhones starting with the iPhone X in 2017.

Apple is expected to debut new iPhones this fall, including its first 5G models, although whether coronavirus has affected the company's supply chain enough to delay that release is a matter of much debate among analysts and other Apple observers.