Movie Review: A Glitch in the Matrix (Worth the Watch?) 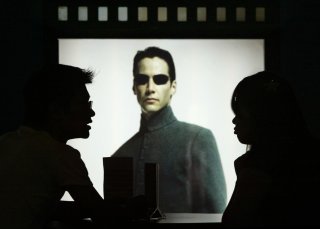 Back in 2012, filmmaker Rodney Ascher directed a documentary called Room 237, which was a deep dive into Stanley Kubrick’s 1980 classic The Shining. The film consisted entirely of the voices of people with unconventional, out-there theories about The Shining.

These ranged from the idea that Kubrick made the movie as a confession that he had taken part in faking the moon landing in 1969, and conjecture about how the film was a hidden allegory about either the Holocaust or the genocide of American Indians. One participant obsessed about the layout of the movie’s Overlook Hotel, while another argued that a post on the wall in the movie of a skier was actually a Minotaur (it looked to me like a skier.)  A whole other movie, the 2016 comedy Moonwalkers, was based around the conceit that the CIA had really enlisted Kubrick to stage a moon landing, in case the real one didn’t work out.

The theories presented in Room 237 were almost entirely unconvincing—as fan theories turn out to be, about 95 percent of the time—but that wasn’t really the point. It was such a fascinating deep dive that I proposed at the time that it be adapted into a TV series, with bonkers theories about a different classic movie each week. Room 237 is one of those movies that should only ever be watched late at night.

In between the director made a documentary about sleep paralysis called The Nightmare. And now, nearly a decade later, Ascher has returned with another documentary, called A Glitch in The Matrix. The film, which premiered last week at the Sundance Film Festival and will reach theaters and VOD this Friday, takes much of its inspiration from another popular film, the Wachowskis’ 1999 science-fiction hit The Matrix.

But rather than applying the Room 237 formula to The Matrix, Ascher’s film takes another angle: He interviews those who believe that the real world has begun to resemble The Matrix, and that we are, in fact, living in a simulation.

No, this film isn’t about The Matrix’s concepts of the “red pill” and “blue pill,” and all of the unpleasant connotations that have become attached to that. Instead, it shares a handful of regular people sharing their views on the simulation hypothesis, interspersed with footage from the film, as well as an old lecture by the famed novelist Philip Dick, in which he claimed late in life to have been imported with special knowledge of the universe’s true nature. There are even some quotes from various well-known tech people, led by Elon Musk, indicating that they themselves believe the simulation theories.

After all, references to “the simulation” have only gained further purchase by world events in the couple of decades since The Matrix was released, from the pandemic to strange weather events to the Donald Trump presidency.

The idea that reality isn’t really reality, and that at some point the real world was replaced by a fake one, is an argument that takes some pretty heavy lifting to make convincingly. A Glitch in the Matrix does not come close to doing so.

Indeed, it must be said that much of what’s uttered in this film is complete nonsense, which doesn’t come close to making the case that we are, in fact, living in a simulation. That was, of course, also the case with Ascher’s Shining movie. But the difference is that in a full movie of what strongly resembles stoned dorm room philosophizing, the musings are very rarely particularly interesting.

Another huge mistake the movie makes is that rather than keep those theorizing off-screen the way he did in Room 237, Ascher gives them animated avatars. This is just a ridiculous, failed conceit, mostly because it’s hard to take anything anyone has to say seriously when they look like an alien in a Buzz Lightyear costume. It doesn’t help that most of these peoples’ theories basically amount to “I saw a weird, unlikely thing happen once.”

As for the Dick speech, which was delivered at a science fiction convention in France in 1977, it’s certainly more intriguing than most of what the other interviewees have to say.

But the lecture, in which Dick lays out how he believed he was given special knowledge about the universe after undergoing dental surgery, is more notable for having predicted the plot of The Matrix two decades in advance than anything having to do with an actual simulation existing. We already knew Dick was great at anticipating where popular science fiction imagination was heading, considering how many of his works were adapted for the movies and TV (Minority Report, A Scanner Darkly, Blade Runner, Total Recall, and more), mostly years after his death.

But the film’s worst decision, by far, is when it hands over the floor for about ten minutes to Joshua Cooke, a man convicted of 2003 of murdering his own parents when he was under the delusion that The Matrix was real. The film has Cooke describe the murders in slow, mechanical detail, and not only does it come across as crass and exploitative, but it doesn’t really have much to do with what this movie is about.

There’s going to be another movie in the Matrix franchise later this year, as part of the Warner Brothers/HBO Max streaming day-and-date strategy. And when it arrives, we’re likely to see more arguments about the simulation hypothesis. But those trying to make the case for such theories will have to do better than A Glitch in the Matrix did.