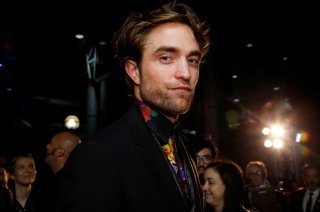 The Devil All The Time is a new film that debuted on Netflix last week and has held a spot in that service’s top ten ever since. It’s a film with a cast full of names, including the actors currently playing Spiderman (Tom Holland), Batman (Robert Pattinson) and The Winter Soldier (Sebastian Stan.) They and other notable actors, including Riley Keough, Jason Clarke, Eliza Scanlan, Bill Skarsgard, and Haley Bennett, The Devil All The Time is a film with big ideas on its mind, about violence, religion, masculinity, and how trauma is inherited through the generations.

But it just doesn’t work. The Devil All The Time is uncommonly shallow, providing very little development of most of its characters, and it’s full of moments of shocking violence that fail to land, mostly because we don’t care about any of these people. The only thing making the film worth watching is a performance by Robert Pattinson, who’s been the best thing about quite a few films in the last year.

Directed by Antonio Campos, The Devil All The Time is based on a novel by Donald Ray Pollock, who also pops up occasionally in an incongruous voiceover narration.

The Devil All The Time spans about thirty years, and multiple generations of multiple families. It’s one of those movies in which something horribly violent happens to just about every female character of consequence.

Skarsgård, who played the evil clown in the IT movies, plays a soldier in World War II, who suffers PTSD after saying a soldier who had been crucified by the Japanese. He then comes home and meets and marries Charlotte (Haley Bennett), while their son grows up to be Tom Holland.

As the years pass, the different generations of the Russell family suffer (and inflict) various terrible traumas, while they occasionally intersect with a couple (Clarke and Keough) engaged in a perverted necrophilic ritual involving male hitchhikers.

Also figuring in the story are Harry Potter veteran Henry Melling as a charismatic/murderous preacher, Sebastian Stan as a corrupt sheriff, and Mia Wasikowska as the preacher’s wife.

The biggest problem with this 138-minute movie is that it’s relatively slow and plodding, while occasionally interrupted by sudden bursts of violence, although those bursts don’t at any point feel earned. Also, once again, we barely care about these characters, who aren’t developed nearly to satisfaction.

The film briefly comes alive at about the one-hour mark, when Pattinson shows up as a luxuriously accented preacher, but you can feel the film deflate once he exits.

The Devil All The Time has been compared to the HBO anthology series True Detective, and indeed, as multiple critics have pointed out, it may have made more sense as a miniseries, once that actually took the time to develop its large cast of characters. As it is, the film is another example showing that just because something’s popular on Netflix, doesn’t mean it’s good.

Stephen Silver, a technology writer for the National Interest, is a journalist, essayist and film critic, who is also a contributor to PhillyVoice, Philadelphia Weekly, the Jewish Telegraphic Agency, Living Life Fearless, Backstage magazine, Broad Street Review and Splice Today. The co-founder of the Philadelphia Film Critics Circle, Stephen lives in suburban Philadelphia with his wife and two sons. Follow him on Twitter at @StephenSilver.