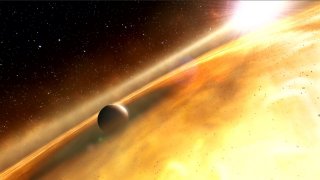 Since the first exoplanet was confirmed in 1995, there have been more than 4,000 such discoveries.

But, according to a newly published study in the Proceedings of the National Academy of Sciences, one particular exoplanet that was “discovered” in 2004 may not actually be a planetary body at all – it could just be space dust.

This exoplanet, once described as a massive, young planet with three times the mass of Jupiter, was first observed by the Hubble Space Telescope and eventually given the name Fomalhaut b by NASA. It was one of the first times an exoplanet had ever been imaged.

Fomalhaut b supposedly orbited around Fomalhaut, a star located about 25 light-years away.

Now, what data is telling NASA is that this “planet” is likely an “expanding cloud of very fine dust particles from two icy bodies that smashed into each other,” according to a statement that accompanied the study.

According to scientists, such collisions are very rare. In fact, the Fomalhaut system may experience one of these events only every 200,000 years.

“These collisions are exceedingly rare and so this is a big deal that we actually get to see one,” the study’s lead author Andras Gaspar, of the University of Arizona, said in a statement. “We believe that we were at the right place at the right time to have witnessed such an unlikely event with the Hubble Space Telescope.

“Our study, which analyzed all available archival Hubble data on Fomalhaut, revealed several characteristics that together paint a picture that the planet-size object may never have existed in the first place.”

When astronomers excitedly reported on the discovery of Fomalhaut b, it was one of the first exoplanets ever discovered in visible light by Hubble. The planet appeared as a bright dot moving rapidly across the sky – but just 10 years later, that dot had vanished.

“The Fomalhaut system is the ultimate test lab for all of our ideas about how exoplanets and star systems evolve,” the study’s co-author George Rieke, of the University of Arizona’s Steward Observatory, said in a statement.

“We do have evidence of such collisions in other systems, but none of this magnitude has been observed in our solar system. This is a blueprint of how planets destroy each other.”