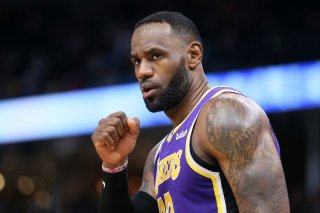 The NBA, of course, isn't playing games right now, and it remains very much an open question whether it will resume its season in any form. But once it does come back, the league has big plans for its streaming future.

The league announced Thursday that it is has entered a partnership with Microsoft to create a new direct-to-consumer platform, to arrive at some point after the league returns from its coronavirus hiatus.

The league and Microsoft have entered a multiyear deal which, per Variety, will "'transform' how fans experience the league’s hoops action, in some cases borrowing concepts from the video-game world." The platform will utilize Microsoft's Azure platform, and also offer AI-based concepts. The deal is between Microsoft and NBA Digital, which is a joint venture between the league and Turner Sports, and as part of it, Microsoft will become the Official Artificial Intelligence Partner and an Official Cloud and Laptop Partner, for the NBA, WNBA, G-League and USA Basketball, beginning next season.

The new platform, the announcement said, "will reimagine how fans engage with the NBA from their devices by customizing and localizing experiences for the NBA’s global fanbase."

According to Variety, the new service will incorporate the existing NBA League Pass subscription concept, which allows NBA fans to watch out-of-market games. But it will also feature such new technologies as stat overlays, as well as gamification concepts like loyalty points, and "tiered rewards, status badges, streaks and unlocking personal achievements," which can be used towards League Pass subscription fees.

Currently or rather, prior to the suspension of the season — the NBA's teams all have deals for local broadcasts of games, while select games are televised nationally, in the U.S., on ABC, ESPN and TNT. Other broadcast arrangements are available in other countries.

“This partnership with Microsoft will help us redefine the way our fans experience NBA basketball,” Adam Silver, the NBA commissioner, said in a statement. “Our goal, working with Microsoft, is to create customized content that allows fans — whether they are in an NBA arena or watching from anywhere around the world — to immerse themselves in all aspects of the game and engage directly with our teams and players.”

There's no word on the timing, or price point, of the new service. NBA League Pass, as of the current season, was priced at between $119.99 and $249.99 a year, depending on whether the user wished to watch a specific team or the entire league. After the suspension, the league offered a free League Pass preview that granted access to games earlier this season.

Meanwhile, The Athletic reported Thursday that “optimism is growing” that the NBA may resume, possibly with the entire league playing the playoffs in Las Vegas.