The NBA's 'Smart Ring': A Way to Limit Coronavirus Exposure for Players? 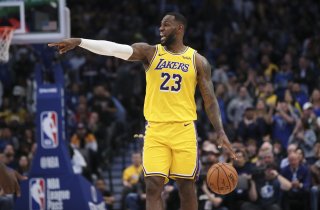 The NBA reached an agreement earlier this month to resume its 2019-2020 season, with 22 NBA teams playing and living for several months within a "bubble" at Walt Disney World in Orlando. Much has been reported already about how different teams will be assigned different hotels at the Disney World complex, and the logistics of moving the entire NBA to a single city.

Meanwhile, CNBC reported this week about a technological innovation that will be used during the NBA's restart. And much of it will involve wearable devices.

According to the report, which cited the NBA’s health and safety memo that was obtained by CNBC, NBA players and their family members will receive "'smart' ring, a Disney MagicBand, individual pulse oximeter and a smart thermometer to help monitor and reduce the spread of the coronavirus."

The memo, CNBC said, stated that "players will have full access to all data collected on them, but team staff will only have access in circumstances where the player’s illness probability score indicates he may be at higher risk or is showing signs of coronavirus."

The "smart ring," which has drawn much of the attention, comes from Oura.

According to Oura's website, Oura has teamed up with the West Virginia University Rockefeller Neuroscience Institute (RNI) and WVU Medicine to create "a digital platform that can detect COVID-19 related symptoms up to three days before they show up."

The MagicBands, known to Disney World visitors as the bracelet that is used both for rides and as hotel room keys, and in the NBA bubble they will be used for contact tracing efforts.

There's been some questioning, however, of the NBA's plans. Specifically, some have also questioned the technological claims about the Oura ring.

"Where's the data for this claim? What does the below text even mean? I call [B.S.]," epidemiologist Zachary Binney said on Twitter, of the 90 percent early detection claims.

"I can only imagine the study that would need to be done to confirm this "90% accuracy" claim," sports science expert Ross Tucker tweeted. "In fact, I have to imagine it because I can pretty much guarantee that it hasn’t been done."

"The Oura Ring use with the NBA return also seems a bit gimmicky. Let's say it really does predict COVID early, you aren't going to sit someone out because their heart rate variability looks concerning," Brian Sutterer, a doctor, said on Twitter. "You're going to test them like you're already doing anyways."

If the technology is legitimate, many have asked, then why is it being given to NBA players and not to, say, doctors and nurses?

"So even in a season where everyone gets a ring the Knicks still won't get a ring," journalist Seth Mandel said.