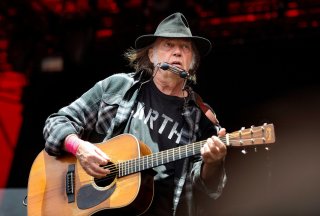 Neil Young has had a legendary career in music that’s spanned six decades, with the singer and guitarist cranking out a series of hits both as a solo artist, and with such groups as Crazy Horse and Crosby, Stills, Nash and Young.

Young is also known for bucking the system when it comes to technology. In 2012, Young announced a portable music player called the PonoPlayer, which was meant to provide lossless audio in a way that the iPod and other portable music players can’t. At a CES press conference in 2015, Young declared that the PonoPlayer “sounds like God,” and admitted that he was so put off by the sound quality of CDs and digital music that he hardly ever listened to music at that point.

While the PonoPlayer, despite earning $6 million in a crowdsourcing campaign, was discontinued just over two years later, Young is still fighting with the giants of big tech.

Per Variety, the seventy-four-year-old Young has announced in an email to his website subscribers that he is spending $20,000 to take Facebook and Google logins off of his Neil Young Archives website, something that Young had been declaring for months his intention to do.

“We’re reaching out because Neil Young Archives is about to begin the process of eliminating Facebook and Google logins from our website,” the email, published by Variety, says. “If you use Facebook or Google for login, we are going to ask you to run through a quick process the next time you log in—it’s just a few extra clicks. At the end of the process, your account will be transitioned to use your email address and a password for login. Goodbye Facebook and Google buttons.”

It’s not clear who Young paid in order to remove those logins, or why it cost $20,000. Gizmodo, in fact, speculated this week that perhaps Young was ripped off by a web developer or someone else who charged him that sum for a service that probably shouldn’t cost $20,000.

“Facebook knowingly allows untruths and lies in its political ads to circulate on the platform, while bots sow discord among users,” Young posted to his website in February. “Sowing dissent and chaos in our country via political disinformation is something we cannot condone. Simply put, Facebook is screwing with our election.”

Earlier this month, per CNN, Young sued President Trump’s reelection campaign, accusing them of copyright infringement for playing Young’s music at rallies without permission. Numerous artists have complained out loud or sent cease-and-desist letters to the Trump campaign and others for that reason, but full-on lawsuits like Young’s are somewhat rare.