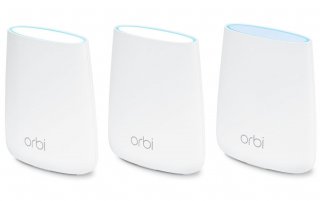 Netgear this week announced the debut of the Orbi 4G LTE Advanced WiFi Router, which the company touts as the first product of its kind with a 4G LTE Modem and Tri-band Mesh WiFi. The integrated cellular modem allows 4G cellular speeds when wired internet isn’t available.

The router is considered an update of the existing Orbi Tri-band Mesh WiFi system, only with the cellular functionality included.

The target audience for the product, according to the company, includes those who require a network connection for small amounts of time, and specifically those who either live in “rural areas and mountainous regions,” or who own vacation homes in such places. It can also be used in conjunction with wired service.

“Today, we are living in an era defined by our ability to stay connected, as many of us are working and learning from home,” David Henry, senior vice president of Connected Home Products for Netgear, said as part of the announcement.

“We have designed the Orbi 4G LTE Router to address this demand for uninterrupted internet access with its capability to provide connectivity over both 4G LTE Advanced as well as traditional wired network connections.”

The company uses an integrated Cat 18 cellular modem and the router will work with a SIM card from AT&T or T-Mobile. It can also be paired with such other Orbi devices as Orbi Voice and Orbi Outdoor.

The Orbi 4G LTE Router is available now at a suggested retail price of $399.99.

Netgear, based in San Jose, has been around since 1996. Also this week, Netgear announced the launch of the Nighthawk Mesh WiFi 6 MK62, MK63 in India, the Mobile Indian reported.

“At Netgear, we are committed to bring our customers the latest WiFi technology. Looking at the current technology trend, we are excited to bring you the latest Nighthawk Mesh WiFi 6 System in the market and accelerate the transition to WiFi 6,” Marthesh Nagendra, the company’s country manager for India, said in a statement as reported by Technuter. “Through our latest Nighthawk Mesh WiFi 6 offering, we aim to provide our customers with the flexibility of a Nighthawk along with a WiFi system that is exceedingly fast and reliable.”