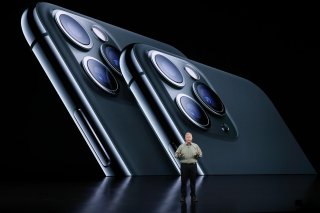 As soon as government officials began suggesting that people wear masks outside to prevent the spread of coronavirus, an obvious problem soon emerged: owners of iPhones equipped with FaceID weren't able to unlock their phones with the masks on, since FaceID requires the user's nose and mouth to be visible.

Various workarounds were developed for the process, including one that entailed taking a new FaceID photo by covering one's face with only half of the mask. Other solutions included simply entering the passcode without trying FaceID, or avoiding using one's phone while out and about.

At the end of April, news broke that Apple was working on a fix for the mask problem for its iOS 13.5 software update, which would skip a step in the unlocking process. The update would make it so the phone would recognize when the user was wearing a mask, and therefore skip directly to the passcode screen. Now, iOS 13.5 is here, and that feature is included.

Per The Verge, "if you swipe up once from the bottom of the screen while you’re wearing a mask, you’ll see the option to enter your passcode right away."

Also included in the new release, as expected, is the exposure notification API for Apple and Google's Exposure Notification system.

According to TechCrunch, this was originally billed as a contact-tracing software tool. Now, the technology is "designed to notify individuals of potential exposure to others who have confirmed cases of coronavirus, while preserving privacy around identifying info and location data," the site said.

"Starting today, our Exposure Notifications technology is available to public health agencies on both iOS and Android," Google and Apple said in a joint statement Wednesday.

"What we’ve built is not an app — rather public health agencies will incorporate the API into their own apps that people install. Our technology is designed to make these apps work better. Each user gets to decide whether or not to opt-in to Exposure Notifications; the system does not collect or use location from the device; and if a person is diagnosed with coronavirus, it is up to them whether or not to report that in the public health app.”

Stephen Silver, a technology writer for The National Interest, is a journalist, essayist, and film critic, is also a contributor to Philly Voice, Philadelphia Weekly, the Jewish Telegraphic Agency, Living Life Fearless, Backstage magazine, Broad Street Review and Splice Today. The co-founder of the Philadelphia Film Critics Circle, Stephen lives in suburban Philadelphia with his wife and two sons. Follow him on Twitter at @StephenSilver.