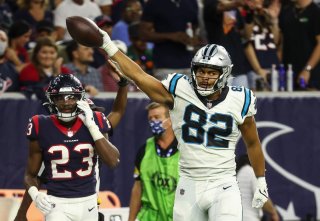 While the Sunday Ticket out-of-market TV package for National Football League (NFL) games has been exclusive to DirecTV since it was established in 1994, numerous reports over the last year have indicated that the package may be on the move, when the current deal expires in 2022.

It’s uncertain where the package would end up, or when the NFL plans to make a decision, although reports from recent months have reported that Amazon may be the frontrunner, that Disney/ESPN are interested, and that the newly spun-off version of DirecTV can’t be counted out either. Some have suggested that the deal could be nonexclusive, with fans able to choose from more than one provider.

Now, a new report says the league is interested in Apple as its new partner.

The sports news website The Athletic reported Thursday that the NFL, “wants—or perhaps better termed, hopes—Apple gets the out-of-market package.” The story added that while the bidding process remains “still months away from being finished,” that is the NFL’s current thinking, according to the site’s sources.

The Athletic added that the NFL is considering allowing fans to pay for individual games, or perhaps subscribe to an entire season of games for one particular team. That would appeal to those who are fans of one team but live in a different television market from where that team is located. The Sunday Ticket package, which grants access to the entire slate of out-of-market games every Sunday, has never before offered this.

Major League Baseball’s similar package, MLB.tv, allows users to subscribe to only one team’s games, as opposed to the entire league.

The Athletic story also said that DirecTV, which is currently paying an average of $1.5 billion for the rights to the Sunday Ticket package, is “unlikely” to get a renewal of the deal. In addition, whoever acquires the out-of-market package could gain an equity position in NFL Media.

The NFL, per the story, would like to get into business with Apple because “it would marry the NFL with the company that sells arguably the globe’s most critical consumer product, the iPhone.”

Apple, which launched the Apple TV+ streaming product in 2019, has never acquired sports rights, nor are they known to have bid on them.

A “source close to the league” commented on the bidding.

“There is a ton of interest in his product from a lot of companies you could probably guess (yes, Apple is one) and probably several others that might not be top of mind… we will see how it ultimately shakes out, but I wouldn’t say anything is imminent here.”