Not Mashed: Did Early Earth Look Like a Potato? 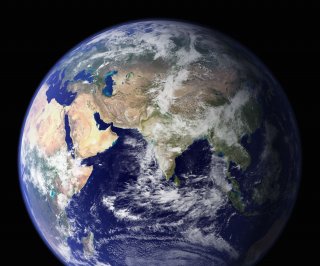 Some 4.5 billion years ago, an early Earth collided with another planet-sized body, and the rubble from that devastating impact eventually coalesced into the moon.

But what did Earth actually look like during that time? According to a new paper by Simon Lock, a planetary scientist at the California Institute of Technology, that ancient Earth looked nothing like the spherical, blue planet that we see today.

The paper suggests that the moon would have been only 8,000 miles away (compared with today’s 238,900 miles) from Earth, and the immense gravitational pull of the satellite on our planet and the faster spin rate would have stretched Earth into a shape that resembled a potato. Moreover, a day on Earth might have been only 2.5 hours long.

The paper’s results were to be presented at the 51st Lunar and Planetary Science Conference in Texas last month, but it was canceled due to the COVID-19 pandemic.

Today, we can see the effects of the moon’s tidal force. Instead of the tides rising and lowering the surface of an ocean, the moon at that time raised a colossal bulge of solid rock. The moon compensated by moving farther away from Earth, while the planet’s spin began to slow, dictated by the conservation of angular momentum (Earth spins faster when the moon is close by, and slower when the moon is farther away). Millions of years later, Earth became roughly spherical.

With the slower spin rate, the young planetary crust ripped apart at the poles and pushed up magma to the surface. This also created many mountains in a short period of time. Much of that crust has already sunk into the mantle, but it was this geological development that gave the planet a more diverse range of rocks to work with, and to eventually make new rocks out of it, according to Lock.

One example that seems to correlate with the findings is the oldest-known rocks on Earth, the 4.4 billion-year-old zircons, which are now embedded in younger rock structures. Scientists have never come to a reasonable consensus about how Earth by itself could have crafted such advanced materials.

The wide-ranging implications of this particular paper are that the moon may have had a more transformative impact on Earth’s geology than previously thought. It also brings up the interesting theory that the Earth-Moon system is ultimately responsible for the abundance of life we see on our planet, making the environment more hospitable for both plants and animals.