A Nuclear Solution to Climate Change? 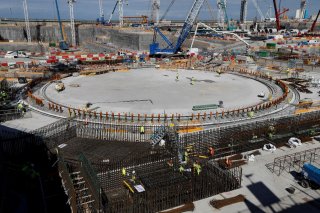 For years, we have heard of the looming threat of climate change hanging just over our heads. The possible consequences of unchecked rising temperatures involve flooded coastal cities, historic droughts, and weathers of a severity we have never seen before. Currently, one of the primary focus areas to reduce carbon emissions is power generation, and nuclear power has continued to be the ideal means to achieve this reduction, generating plenty of power that is green, safe, and cheap for the consumer. It is an increasingly important industry, projected to produce 21 percent of the U.S. energy in 2020.

Unfortunately, nuclear does have several shortcomings. One of the most glaring of these is cost. A 2009 report from the Union of Concerned Scientists noted that it takes between $2 and $4 billion, and potentially as much as $9 billion, to build a nuclear reactor unit. Other issues include size (nuclear power plants are not small), the fact that plants take longer to build compared to fossil fuel plants, and the vast quantities of power produced makes nuclear impractical for limited use, such as powering small communities.

Yet a new advanced reactor design from NuScale Power could change all that. The company has produced something called a Small Modular Reactor (SMR), informally called the NuScale SMR.

What is a SMR?

SMRs are nuclear reactors that are much smaller than a normal reactor, taking up a fraction of the space required for a normal nuclear power plant. By way of comparison, the containment structures of Plant Vogtle in Georgia are 140 feet in diameter and 226 feet tall. The NuScale SMR’s containment structure size? Just 15 feet in diameter and 17 feet tall. Additionally, while a normal reactor may have a generation capacity in the upper hundreds, if not thousands, of megawatts (MWs), SMRs have generation capacity in the tens of MWs. The NuScale SMR can produce 60 MW, making it an economical choice. Finally, the NuScale units are modular, meaning that unlike current reactors—which have to be assembled on-site—the NuScale SMR is assembled elsewhere and shipped in just three pieces, which can be easily put together.

This small design, prudent power output, and modular design/simplified construction process means that SMRs like NuScale’s are ideal for powering remote areas. This doesn’t mean that SMRs couldn’t be used in a more populated environment; a large facility using NuScale SMRs could have anywhere from one to twelve reactors., providing a maximum of 720 MWs—as much as a conventional reactor. As as a side benefit, the heat produced by SMRs could also be used for various industrial applications, such as desalination, hydrogen production, and so on.

How do SMRs work?

Despite the many things that the NuScale SMR does differently from a typical reactor, the engineering behind it is remarkably the same.

Conventional reactors are known as pressurized water reactors, or PWRs. The cores of these reactors are cooled with pressurized water. This water takes the heat from the core and transfers it, using steam generators, to a second loop of water. This process of transferring heat from one place to another through the use of fluids is known as convection. The second loop is at a lower pressure, and as such boils into steam from the added heat. The steam is run through a turbine to generate electricity, after which, it is cooled through the use of a condenser by a third loop of water, usually sourced from and returned to a body of water, such as a river, lake, or the ocean.

The NuScale SMR is essentially a PWR, just smaller and with some minor but important changes. In conventional reactors, large pumps are used to circulate the coolant water between the steam generator and the core. Most designs will have cooling through natural convection if these pumps fail, but the NuScale is designed to work on this concept, and as such, it simply does not use these pumps. As a result of always working through natural convection, the NuScale SMR does not need any offsite access to AC or DC power to have a safe shutdown. This is one of the biggest contributors to increased safety provided by the NuScale SMR, though there are others, such as the core being submerged in the ultimate heat sink and increased defenses to protect the nuclear fuel in the spent fuel pool. All these changes, along with many more, allow the emergency planning zone (in case of a nuclear disaster) to shrink from over 50 miles for a typical power station to just the size of the site for the NuScale SMR.

In other words, no more Chernobyls or Fukushimas.

Towards a New Nuclear Age

Washington has taken notice of the potential of SMRs like NuScale’s. In fact, it was originally estimated that the Nuclear Regulatory Commission (NRC) would approve NuScale’s own design around January 2021. In a surprise twist though, the NRC decided to go ahead and approve the NuScale SMR on September 2. This means that, as of now, utility companies can now license their facilities to use the NuScale SMR.

In short, the NuScale SMR is here. NuScale Power itself estimates its first reference project using their SMR would be completed by 2027 in the state of Idaho. From there, NuScale has multiple initiatives set up to further build plants utilizing the NuScale SMR, such as PROGRAM WIN, which is set to build projects in six western states.

This marks a pivotal moment in the nuclear industry and human history. The key to abundant clean, safe, and cheap power has been in man’s hands for decades, yet here it is once again, more versatile, safer, and cheaper than ever before. With the certification approval of the NuScale SMR by the NRC, mankind has secured a solution for not just the United States, but the entire world, to produce clean and effective power and addressing climate change.

Frank Ellsworth is a junior at UMass Lowell, pursuing a BS in Physics with a focus in Radiation Science. He holds an AS in Nuclear Engineering Technology and has worked as an auxiliary operator at UML’s research reactor.