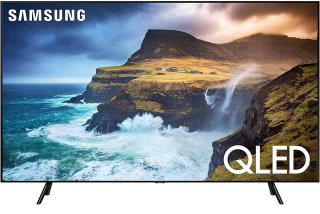 It’s been reported throughout the year that Samsung Display is working on a technology called QD-OLED, which will serve as the next generation of the company’s TV display tech. As of late August, Samsung’s display arm was reportedly showing prototypes of the technology to potential partners, including Sony and Panasonic, as well as Samsung’s own TV division. At the time, it was thought that Samsung would begin mass production of the panels sometime in 2021.

Now, there are reports that trials for the tech are on the way.

According to the English-language Korean publication The Elec, trial runs for the manufacture of QD displays will begin in December. QD-OLED is described in the report as “the first iteration of Samsung Display’s so-called QD displays.”

That is a separate technology from QNED (QD nanorod LED), something else that Samsung is working on for the future. Samsung, earlier this month, reportedly obtained trademarks for several phrases related to its next-gen TV tech, including “Samsung QNED,” ‘QLED Neo’, “QLED Platinum,” “QLED+” “QLED Z” and ‘Quantum Matrix.” The company had trademarked several phrases, including “Dual LED” and “Zero Bezel,” in late 2019 that ended up being a part of its 2020 lineup of TVs.

The new Elec report added that Samsung will begin with 15,000 substrates per month, which is about half the facility’s capacity. The company will invest further, The Elec says, provided that it can add customers, and “stabilize yield rate.”

Samsung had said in 2019 that it would invest 13.1 trillion won, or $11 billion based on exchange rates at the time, in “QD” technology, which includes both QD-OLD and QNED, with LCD production sunsetting in 2021.

According to research firm Omnia, TV shipments worldwide hit 62.9 million in the third quarter, a record number. Another firm, Trendforce, had put the number at 62 million. Both agreed that Samsung was the leading brand in the world, with fifteen million shipments, followed by LG, TCL, Hisense, Xiaomi, Skyworth, Sony, Vizio, Sharp and Philips.

The North American market posted year-over-year growth of 60 percent, the most in the world, as the pandemic caused many consumers to spend the money they weren’t devoting to travel and other normal pursuits on TV and other similar goods. Shipments were down, however, in China and in the Asia-Pacific region.

“Clearly the current trend is more than just release of pent-up demand and inventory replenishment. With the Northern Hemisphere winter and renewed lockdown measures, TV viewing is becoming more valuable to consumers,” Paul Grey, Senior Research Director, for TV of Omdia, said in the release of those numbers in mid-November.