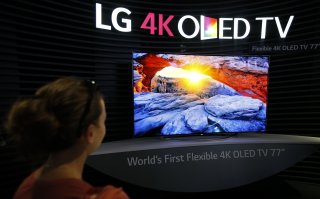 OLED TVs are a major feature of many of the Black Friday deals being offered this week. But even before that, there are indications that OLED models are becoming a larger part of the advanced TV market.

A new report from Display Supply Chain Consultants (DSCC), titled  Quarterly Advanced TV Shipment and Forecast Report, shows that the OLED category is gaining a share in the advanced TV space. At the same time Samsung, which does not sell OLED TVs—at least, not yet—is losing some of that share.

“Advanced TV shipments in Q3’21 increased by 20% Y/Y to 4.5M units,” DSCC said in an abstract it released for the report.  “In volume terms, the entire Y/Y increase was provided by OLED TV, as Advanced LCD TV shipments were flat Y/Y. Within the LCD category, shipments for 65” and smaller sizes declined Y/Y while Advanced LCD TVs of 75” increased 32% Y/Y and Advanced LCD TVs larger than 75” increased 58%. All screen size groups for OLED TVs increased Y/Y, with the biggest gains in 48,” up 399% Y/Y and 77” and larger, up by 194%. The 48” OLED TV models were introduced only in Q2’20 but already represented 15% of OLED TV volume in Q3.”

DSCC defines Advanced TV as “any TV with an advanced display technology feature, including all OLED TVs, 8K LCD TVs and all LCD TVs with quantum dot technology.”

The report also said that while OLED TV share in the Advanced market actually fell during the three-period period between 2018 and 2020, OLED made a comeback in 2021, thanks to “, the additional capacity from LG Display’s Guangzhou fab combined with the steep increases in LCD TV panel prices up through Q2’21.”

Samsung, despite not making OLED TVs, is in the lead in North America, the report said.

“In North America, Samsung enjoys a dominant position on the strength of its large-screen product portfolio but has seen its share erode as competitors in both Advanced LCD and OLED TV grow share,” according to the report. “Samsung increased its share in North America shipments and held revenue share Q/Q but has lost share Y/Y in both measures. LG increased Advanced TV shipments to North America by 93% Y/Y to increase its unit share to 21%.”

The category may soon get a scrambling, as Samsung is expected to unveil a new type of TV, QD-OLED, at CES in January. Digital Trends has described the technology as “a hybrid display technology that aims to take the already very impressive qualities of OLED TV and improve on brightness and color through the use of quantum dots.”