Panasonic’s New OLED Flagship Has Arrived (But Not in the U.S.) 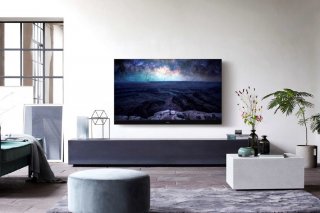 The HZ2000, Panasonic’s flagship OLED TV for 2020, was introduced at CES back in January, and it became available this week, in Europe, as Panasonic stopped selling their TVs in the U.S. back in 2016. The new TV is a follow-up to last year’s GZ2000.

The TV, available in 55- and 65-inch screen sizes, boasts both  Dolby Vision IQ and Filmmaker Mode, and was tuned by Stefan Sonnenfeld, described by the company as “a leading Hollywood colorist.” It was, for the second straight year, the only TV introduced by Panasonic at the big show in Las Vegas.

In a hands-on published during CES in January, What Hi-Fi praised the TV’s improved brightness, support for Dolby Vision IQ, and Dolby Atmos surround system, while listing “not the most beautiful flagship TV” as a drawback.

“Panasonic’s message is very similar to last year: this top-tier TV promises to deliver Hollywood to your home,” the early review said. “The Panasonic HZ2000 flagship OLED TV for 2020 may not be the most aesthetically pleasing top-tier TV out there with its rather functional-over-fancy design, but it looks the part where it counts most: the picture on the screen.”

TechRadar, in a hands-on of their own at CES, called the new Panasonic TV “a legend in the making.” That site praised the “beautiful, natural pictures,” Filmmaker Mode, and Multi-HDR support. It had negative words, however, for its similar look to last year’s model, and for “Lower peak brightness than QLED.”

“Last year Panasonic brought its best and brightest TV to CES, and this year is no different — and we can say with confidence that the HZ2000 is one of the best-looking TVs of the show so far,” the site said. “It doesn’t have as many features as some of its contemporaries or much innovation in the design department, but in terms of sheer visual prowess, Panasonic’s 2020 flagship OLED has a lot to offer.”

In the early days of HDTVs, Panasonic was a leading brand, mostly associated with plasma TV technology. But when plasma declined, Panasonic did too. The company stopped making plasma TVs in 2014, and exited the U.S. TV market altogether two years later.