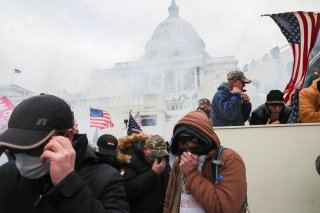 Parler, the alternative social network that has been accused of hosting many of the discussions related to last Wednesday’s Capitol insurrection, is currently offline after it was removed from Apple and Google’s app stores, and also had its web hosting pulled by Amazon Web Services.

As a result, the new most popular free app on the Apple App Store is the encrypted messaging app Signal, which is produced by the company of the same name.

Fox Business reported this week that Signal became the most popular free app on both App Stores, reaching 1.3 million new downloads Monday. As of Wednesday, it remained the top free app in the Apple Store. Telegram, another streaming app, was second, while TikTok was third.

It’s not necessarily the case that these downloads were entirely driven by the felling of Parler, as Fox Business noted that some users of WhatsApp, the Facebook-owned messaging app, “expressed concern with a privacy update set to roll out in February.”

Signal and Telegram are not social networks, but rather messaging apps, so they don’t work quite the same as Parler, or for that matter Twitter or Facebook. It would also appear to be unlikely to fall victim to the sort of crackdown that felled Parler.

“Millions of people use Signal every day for free and instantaneous communication anywhere in the world,” the App Store description of the app says. "Send and receive high-fidelity messages, participate in HD voice/video calls and explore a growing set of new features that help you stay connected.”

Ironically, Signal was part of a minor controversy in the early days of the Trump Administration. Vanity Fair reported in February of 2017 that White House staffers were using Signal, and another similar app called Confide, in order to “communicate with reporters—and with each other—incognito.”

These were the days when Sean Spicer was the White House press secretary, and the White House was seeking to put a stop to frequent leaks. This led to concerns, however, that the use of such apps might violate the Presidential Records Act and other rules of preservation of official records.

In news related to the Parler shutdown, CNN reported Wednesday that Amazon Web Services has responded to the lawsuit filed by Parler after the network was taken down.

“This case is about Parler’s demonstrated unwillingness and inability to remove from the servers of Amazon Web Services (‘AWS’) content that threatens the public safety, such as by inciting and planning the rape, torture, and assassination of named public officials and private citizens,” Amazon wrote in a court filing, per CNN,  Amazon also invoked the Section 230 liability shield.