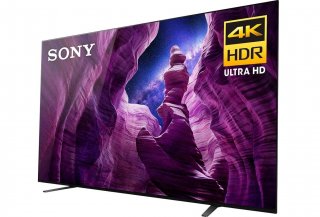 While TV technologies for the future are in development all over the place, the two main high-end TV technologies available remain OLED (organic light emitting diode) and QLED (quantum dot LED TV, at least in Samsung’s version of it.) The major TV manufacturers are split between those two technologies.

That depends on a wide variety of factors, as well as on what the specific buyer is looking for. Judging by RTINGS’ current rankings of the best available TVs, the top nine TVs available are all OLED models, with the top of the list dominated by LG and Sony models from between 2019 and this year; the #8 TV is Vizio’s 2020 OLED TV, while the top QLED model, at #9, is Samsung’s QN90A QLED TV, which is part of its 2021 line.

Digital Trends last month looked at the question of which of the two technologies is better.

“QLED comes out on top on paper, delivering a higher brightness, longer lifespan, larger screen sizes, and lower price tags. OLED, on the other hand, has a better viewing angle, deeper black levels, uses less power, and might be better for your health,” the site concluded. “Both are fantastic, though, so choosing between them is subjective. QLED is the better all-rounder, but OLED excels when you can control your room’s lighting.”

CNET also recently looked at the OLED vs. QLED question.

“So which one is better? In our side-by-side comparison reviews of picture quality, OLED beats QLED every time. I haven't tested the latest crop of 2021 QLED and OLED models yet, but based on what we've seen in the past, I expect OLED to continue to produce superior image quality to QLED,” the site said.

Recently, the company that makes most of the OLED panels used in TVs claimed a significant environmental angle to the benefits of OLED TV technology.

According to Business Korea, LG Display posts a product recycling rate of 92.2 percent of its OLED TV panels.

In addition, per the report, “LG Display shipped 15,000 OLED panels during the first quarter of 2021. By producing OLED panels instead of LCD panels, it reduced plastic consumption by 71,550 tons.”

According to TechRadar, because OLED panels are “self-emissive,” they don’t require backlight the way QLED and LED TVs do, and also use much less energy.

LG Display, which makes the OLED panels for most of the world’s OLED TV manufacturers, in a separate company from LG Electronics, which makes OLED TVs and other consumer electronics products. LG Display was formed as a joint venture between LG Electronics and Philips, and became an independent company in 2004.