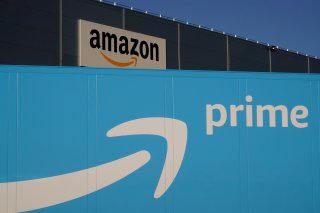 Amazon, over the course of its rise into the planet’s largest e-commerce colossus, has been known for selling things that have mostly been sold by brick-and-mortar retailers. Amazon has taken over the selling of books, clothes, and numerous other items, to the point where much of traditional retail has been disrupted, if not eliminated.

Now, a surprising new report has Amazon considering an entry into a very traditional, non-e-commerce industry—one of the biggest ones, physically, in existence.

The Daily Mail reported Sunday that Amazon is “circling” AMC Theatres, the largest cinema chain in the world. The report stated that the two companies “are thought to have held talks about a potential takeover of AMC by Amazon,” while cautioning that it remains unclear if such discussions remain active.

Neither side appears to have commented on the report, although it was enough to send AMC’s stock soaring in Monday trading. The stock jumped as much as 50 percent early, and was still up around 25 percent as of around 11 a.m. Monday.

Amazon has made forays into brick-and-mortar in recent years, most notably when it acquired Whole Foods. It has also launched physical book stores in some cities.

AMC, which has of course shut down all of its theaters due to the coronavirus pandemic, was the subject of bankruptcy rumors in March but, per Motley Fool, its performance improved in April, after the company raised $500 million in senior debt.

The company also engaged in a high-profile war of words with Comcast-owned movie studio Universal, after the company successfully released “Trolls World Tour” on video-on-demand. After Universal talked about wanting to continue that model in the future, AMC vowed to no longer show Universal films at its theaters.

AMC currently has a market cap of around $535 million. Amazon, worth over a trillion dollars, can certainly afford to pay a premium in such an acquisition.

The question is of what Amazon would want with a movie theater chain. The company certainly has showbiz aspirations, as its Amazon Studios annually comes up with a slate of movies that are meant to compete for Oscars, while also operating both the Amazon Prime Video streaming service and producing original shows for that as well. Jeff Bezos has become a regular on awards red carpets.

Amazon could use the chain to push its own movies, especially now that the Justice Department has taken steps to overturn the Paramount Decrees, a more than seven-decade-old ruling disallowing movie distributors from owning exhibitors. Amazon could also apply Prime discounts and other sales strategies that it used following its takeover of Whole Foods.

Rival Netflix has taken over the lease of the Paris Theater in New York and has been rumored to have done the same for the Egyptian Theatre in Hollywood, but has not made a move to buy an entire chain.