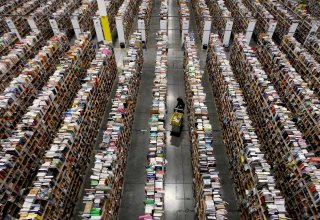 Last year amid the ongoing coronavirus pandemic, Amazon sellers doubled prices on 136 products that are considered “essential” for consumers, health-care providers, and small businesses, according to a new report by the U.S. Public Interest Research Group (PIRG) Education Fund.

“Our research throughout the pandemic has revealed massive price spikes on Amazon listings,” U.S. PIRG stated.

U.S. PIRG officials admitted that price increases are inevitable whenever demand spikes to high levels, but they added that states could do more to better enforce price-gouging laws.

They noted that Amazon could also take stronger action to protect its consumers.

In addition to doubling the price of 136 essential products, there were 409 listings with price increases of more than 20 percent, with one in seven being sold directly by the e-commerce giant, according to the report.

For example, one seller charged $109.99 for a thirty-six-roll package of toilet paper, which represented a price hike of nearly $80 from a year ago. And patio heaters, often used by restaurants for outdoor dining, had the ten largest price hikes by percentage.

“Items that are not considered PPE or essential supplies still serve an important purpose as a result of stressful pandemic circumstances, and sellers should remain aware of the effect huge price spikes can have on their customers,” wrote the report’s author, Grace Brombach, who is the consumer watchdog associate of the U.S. PIRG Education Fund.

One spokesperson from Amazon stated that the site’s sellers do set their own prices, but the company has a long-standing policy against price gouging and monitors listings constantly in search for violations.

As the nearly year-long pandemic has forced more people than ever to do their shopping online, Amazon has undoubtedly been a huge winner. Driven largely by online sales during Black Friday and Cyber Monday, the company announced that this past year’s holiday shopping season was the biggest in its history.

Consumers spent $6.3 million per minute shopping online on Black Friday—or $27.50 on average per person. About $3.6 billion was spent via smartphones, a 25.3 percent increase compared to last year, reaching 40 percent of all online spending.

As for Cyber Monday, consumers opened their wallets to the tune of $10.8 billion, setting a record for the largest internet shopping day ever in the United States. Spending climbed 15.1 percent compared to the year prior, according to Adobe Analytics.