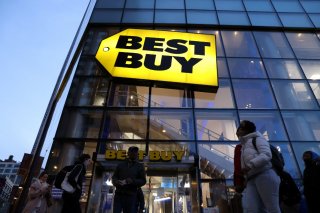 Theft has always been a problem for retailers, and while no one in the retail industry likes it, it’s not often that major corporations admit that theft is affecting the bottom line.

Corie Barry, the CEO of Best Buy, did just that this week, following the release of Best Buy’s quarterly earnings.

Barry indicated on CNBC Tuesday that a recent rise in organized retail theft has begun to affect the chain's bottom line—and is also scaring the company’s employees.

“These are traumatic experiences, and they are happening more and more across the country,” Barry said of the thefts on CNBC’s Squawk Box. “Obviously, their safety is our first priority.” The company will be locking up more items.

“When we talk about why there are so many people looking for other jobs or switching careers, this, of course, would be something that would play into my concerns for our people because, again, priority one is just human safety,” Barry said in the interview. “And it’s hard to deal with this potentially multiple times in one location.”

Per CNBC, “analysts are concerned that Best Buy could see sales weaken as consumers shift spending to other areas like travel and entertainment. That may force the retailer to offer more promotions on laptops, smartphones and more — even as supply chain-related costs remain high.”

“We delivered record Q3 results, including 2% Domestic comparable sales on top of 22.6% last year, as our leaders continued to drive new ways of operating and our employees continued to do amazing things to support our customer’s technology needs in knowledgeable, fast and convenient ways,” Barry said in the earnings result. “Our omnichannel capabilities and our ability to inspire and support across all of technology in a way no one else can means we are uniquely positioned to seize the opportunity in this environment and in the future.”

“We are looking forward to a strong holiday season and believe we are extremely well-positioned with both the tech customers want and fast and convenient ways to get it,” Matt Bilunas, Best Buy CFO, also said in the earnings release. “We are committed to driving initiatives that will deliver future growth and our Q4 outlook reflects continued investments in our new membership program, technology, advertising, and our health strategy.”