The Reviews Are In: Ring Debuts New $100 Entry-Level Doorbell 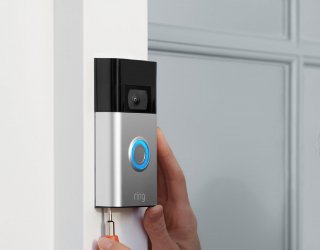 Ring, the Amazon-owned video and security company, has become popular in recent years, due to their products' ability to capture everyone from package thieves to snakes to bees.

The product also connects with the Ring app, and is offering a new solar charger. And for those whose Wi-Fi doesn't extend all the way to their outside doorbell, Ring also offers a $49 Ring Chime Pro to extend the signal, while also chiming.

Ring continues to offer the Video Doorbell 3, for $199.99, although its Video Doorbell 2 has been discontinued and replaced by the new device. The company also offers security cameras, alarms, and smart lighting products.

“We think customers should expect more from their Video Doorbell – better hardware, improved motion detection, and easy installation — but shouldn’t have to pay a premium for it,” Jamie Siminoff, Chief Inventor and Founder of Ring, said as part of the announcement.

The first review of the new Ring Video Doorbell, from Tom's Guide, gives the product four stars out of five and calls it "the top video doorbell under $100."

"The $99 Ring Video Doorbell may not have the highest resolution or all of the latest features, but it works well for the price and provides a clear enough image that you can recognize visitors day or night," the review says.

The site went on to praise the product's low price, its ease of installation, and that it works with both existing wiring and battery-operated configurations. The review did note that it offers lower resolution than some competing video doorbells.

According to Strategy Analytics numbers from February, Ring had a leading 40 percent of the video doorbell market, followed by Google Nest with 24 percent, with several other competitors in single digits. The arrival of an affordable product represents a chance to increase Amazon and Ring's percentage of that market.

The Video Doorbell is available for preorder now and comes out June 3.