The Reviews Are in for TCL's 10 Pro Smartphone 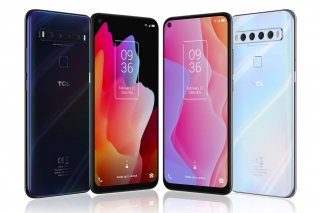 TCL, the partially state-owned Chinese electronics company, has mostly been known for its production of televisions, a product for which it led market share in the U.S. as of mid-2019. And while the company has long manufactured phones for other brands, TCL announced earlier this year that it would release its first self-branded smartphones.

The announced line consists of the TCL 10 5G, the TCL 10 Pro and TCL 10L. The latter two devices are hitting the market May 19—with the 5G device expected in the third quarter—and the first reviews appeared Thursday.

Writing for CNN, Jacob Krol says the TCL 10 Pro “holds its own as a mid-range device with an impressive display,” although Krol says he doesn’t expect the product to “take over the mid-tier smartphone market.” The $449.99’s phone’s key rivals are seen as the Samsung Galaxy A line, as well as the newly revived iPhone SE.

Krol praised the curved screen, the presence of a top headphone jack, and the 6.47-inch AMOLED display. He called the camera a “let down,” however.

The Verge’s review was more mixed, with reviewer Jon Porter calling it “a great-looking device without the internals to match,” and rating it 7 out of 10.

Porter praised the design and display and “unobtrusive software,” while also noting the headphone jack. But he also noted the “so-so camera,” both a screen and shortcut button too prone to accidental touches and “occasional performance stutters.”

“TCL has built a lot of its recent reputation off the back of its solid midrange TVs,” he concluded. “It just might take a little longer for its logo to stand out in the world of smartphones.”

The review on the Android enthusiast site Android Police said that the TCL 10 “fails to stand out in a crowded mid-range market.” Reviewer Taylor Kerns opined that “the 10 Pro gets a lot right—but unpolished UI and shoddy image processing hamper what could have been an interesting player in the budget space.” He rated the phone 6.5 out of 10.

While some technology companies with ties to the Chinese government have been the subject of international controversy involving accusations of spying—the Trump Administration this week extended a ban on supply chain parts from Huawei and ZTE for another year—that hasn’t happened with TCL, which has managed to gain a major foothold in the U.S.