Roku Caps Off Huge Year With $650 Million in Revenue, Over 50 Million Active Accounts 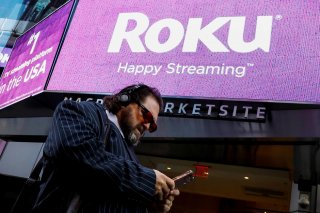 Roku finished off a banner 2020 with fourth-quarter revenue of $649.9 million, a 58 percent jump over the same period the same time the year before. That beat analyst expectations of  $619 million.

The company reported 51.2 million active accounts at the end of the fourth quarter and 17 billion streaming hours, representing increases of, respectively, 39 percent and 55 percent.

Roku proclaimed that it achieved record revenue, gross profit and adjusted EBITDA for both the fourth quarter and the full year. Roku also boasted the top TV operating system in 2020.

In the investor letter, Roku also laid out some of its philosophy about its business.

“We believe that all TV will be streamed,” the letter said. “Our mission as the leading TV streaming platform is to connect the TV ecosystem of viewers, content publishers, and advertisers, thus creating a virtuous cycle that benefits all participants. At the core of our strategy is providing consumers with an excellent streaming experience via an easy user interface, broad content selection, and great value. We seek to grow the scale of our user base, increase engagement by our users, and then monetize the activity on our platform, which we can then reinvest in our platform.”

In terms of its outlook, Roku prepared investors for post-pandemic uncertainty, warning that in 2021, “year-over-year comparisons will be quite volatile.”

“We believe we have sufficient visibility in the short-term to provide formal outlook for Q1,” the letter stated. “However, as we look farther ahead, the level of uncertainty compounds when trying to assess the net impact of a variety of factors such as the timing of the vaccine rollouts, emergence of new COVID-19 variants as well as the lasting economic impacts of the pandemic.”

A report earlier this week, citing a job listing, indicated that Roku is looking to make a jump into original content, presumably on the Roku Channel. The company had announced a few weeks earlier that it had acquired the content produced by Quibi, the now-defunct short-form streaming service, during Quibi’s short lifespan last year.

“2020 was a pivotal year to start the streaming decade as pandemic related disruptions served as a catalyst in the fundamental shift to TV streaming and demonstrated the power of our strategy, technology, and execution,” the company declared. “Our strategy and execution are working well, and we are seeing the results in our financial performance, our continued position as America’s No. 1 TV streaming platform by streaming hours, and our early international successes.”