The Segway Is Dead 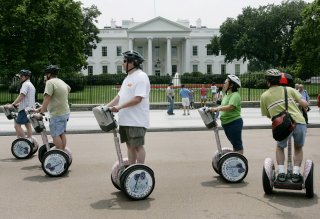 The Segway, invented by Dean Kamen, was one of the most hyped inventions of all time when it came on the market in 2001. It never quite reached the major popularity or ubiquity that its hype indicated- and now, 19 years later, it's being discontinued.

Fast Company reported Tuesday that the last Segway PT will roll off the assembly line on July 15, with the company laying off 21 employees from its plant in New Hampshire. And while the original Segway itself will be discontinued, the Segway company will continue to make Segway Discovery scooters. The company does its other manufacturing in China.

The Segway was developed as a scooter that the user could control by leaning forward, without the possibility of falling over. Developed during the first e-commerce bubble in the late 1990s, the product arrived just as that bubble had burst.

The Segway product never really brought about the revolution in personal transportation that was promised at its launch, and the company only sold a total of 140,000 Segways over nearly 20 years, according to Fast Company.

Many of those Segways were purchased by police departments and other security and law enforcement agencies. The company behind the Segway has been sold twice over the years, and is currently controlled by the Chinese company Ninebot.

The technology executive Noel Lee, who founded Monster Cable and suffers from a  degenerative nerve disorder that limits his mobility, has often been seen at tech conferences giving speeches and presentations aboard a gold-plated Segway. An organization called SegsForVets was launched in 2005 to provide Segways to wounded war veterans.

Hoverboards, which were briefly popular about five years ago before safety concerns mostly scuttled the product category, was based on similar technology to the Segway, and the Segway company even came up with its own version, the Segway MiniPro, in 2016.

At CES this past year, the company introduced the S-Pod, a "seated riding" product that was compared by more than one observer to the futuristic vehicles in the Pixar movie "Wall-E." That product remains in the concept phase.

According to Fast Company, reasons for the underwhelming success of the Segway included a lack of evolution in its design, and newer products like e-scooters and e-bikes ended up taking up many of the functions that the Segway was meant to serve, while also being smaller and cheaper.