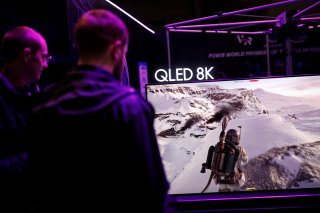 For the past several years, QLED panels have been no strangers to rave reviews. If you were to eliminate the ultra-expensive OLEDs from the best HDTV on the planet discussion, there is no question that it would most likely be QLEDs sitting on top of the best-picture summit.

Sorry to say, but with a QLED panel, you won’t be on the receiving end of all of the picture goodness of OLEDs—which includes fantastic picture quality, accurate colors, wide-angle viewing, deepest blacks, and inimitable uniformity and contrast levels. That, however, is not that surprising, considering that there will be natural shortcomings due to QLEDs not tapping into the power of self-emissive pixels.

QLEDs—essentially LCD TVs with quantum dots—do have their own set of advantages, the most notable being able to get noticeably brighter than OLEDs, which can come in handy if your TV-watching space is naturally bright or has a lot of ambient lighting. Because of their powerful backlighting, QLED panels are exceptional in generating incredibly bright light that can really help mitigate those annoying glares and reflections.

So, if you’re looking to upgrade your streaming and home entertainment experience in 2021 with a QLED panel, then be sure to check out these five standout options.

The Korean tech giant has a great 8K QLED option for you right now—and it’s the sixty-five-inch Q900 Series. What you’ll be receiving is a premium TV-viewing experience, thanks largely to its much-vaunted QLED technology and excellent overall image quality that boasts plenty-deep black levels and outstanding contrast ratios. Samsung’s highly regarded quantum-dot technology enables you to experience images bursting with a dazzling range of colors, each upscaled to incredible clarity driven by an intelligent 8K quantum processor.

You really need to do yourself a favor and take a long hard look at the TCL sixty-five-inch 6 Series 4K HDTV, which for years has proved that you don’t necessarily have to overspend to get a great panel. This set boasts 4K UHD picture with the much-praised QLED color technology and Dolby Vision HDR. Not to be outdone is the built-in Roku TV, which, along with Android TV and LG’s webOS, is considered an elite option among all smart TV platforms out on the market right now—and to top it off, it’s basically free with the TV.

The eighty-five-inch Q950TS QLED 8K TV is huge and quite expensive, but it is considered by many to be Samsung’s best HDTV of 2020. Its appearance is absolutely gorgeous, as you can barely even make out any bezel at all when looking at it straight on. The panel also boasts top-notch image-quality specs, including the much-coveted full-array local dimming and 8K capability, which flaunts sixteen times more resolution than a regular HDTV. Equipped with the AI Quantum Processor 8K, the Q950TS comes with a next-generation feature called Adaptive Picture, which can optimize the screen to both ambient conditions and individual images.

If you’re looking to escape Samsung’s QLED ecosystem, make sure to take a gander at Vizio’s sixty-five-inch P-Series Quantum X. Be aware that Quantum X’s panel will probably never topple LG’s OLEDs from the best-picture summit, but it does emphatically meet the high standards of the best LCD-based, quantum dot-enhanced HDTVs out there—including Samsung’s QLED models. This set, employing its own next-generation quantum-color technology, boasts outstanding deep black levels and a uniform screen.

With the reasonably priced Samsung Q70 Series, know that you’ll be on the receiving end of outstanding overall image quality and nearly perfect black levels. The high light output and next-generation full-array local dimming also work wonderfully well, so you’ll surely enjoy the lively and accurate colors during movie nights and PlayStation marathons. It comes with a true 120Hz panel, which markedly improves the TV’s overall motion performance, and know that it fully supports HDR content in HLG and HDR10+ formats.