The Story of that Tesla Model 3 that Crashed in Taiwan 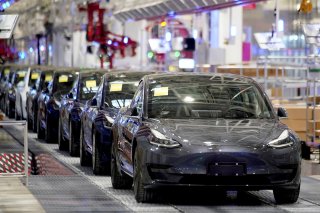 The joint rocket launch between NASA and Space X went off without a hitch on Saturday, but a few days later, another vehicle produced by another of Elon Musk's companies wasn't so lucky.

In a video that went viral Monday, a Tesla Model 3 on autopilot can be seen crashing into a truck trailer that had overturned. According to Jalopnik, the video was shot in Taiwan, and appears to have been caused by the autopilot system not detecting the truck.

It doesn't appear that Tesla has commented on the incident. The company has been clear, however, that Tesla cars aren't yet at the point where they can drive themselves completely.

According to the site, the crash is an indication that Tesla's Autopilot system has had trouble recognizing " light-colored large immobile objects."

The car was not fully self-driving. The car had a human driver, a 53-year-old man, who was merely using the Autopilot function. He appears to have escaped the crash unharmed.

"It would be nice if Autopilot’s automatic emergency braking system would prevent accidents like that, but it doesn’t always work, and there’s no substitute for paying attention at all times," the electric car news website Electrek wrote of the incident. "Tesla is constantly improving its Autopilot features, but it still asks drivers to keep their hands on the wheel and pay attention at all times every time they activate the features, which ultimately means that the driver is at fault here."

Autonomous car technology has been seen as a growing tech sector of the future for many years, with companies like Uber hoping to eventually run an entire fleet of driverless cars. But the technology has repeatedly run into trouble when it comes to practicality and safety.

Back in 2018, a Tesla driver was killed when a Model X SUV, which was running in Autopilot, crashed into a highway barrier. Another such crash took place in Florida in 2016. There was also a crash of a Tesla Model 3 into a brick wall in South Carolina at the end of May, but that one did not involve Autopilot, per Carbuzz, and the driver actually "claimed he mistakenly hit the gas pedal instead of the brake while attempting to park."

The Cybertruck Shows How Tesla Could Dominate the Auto Industry