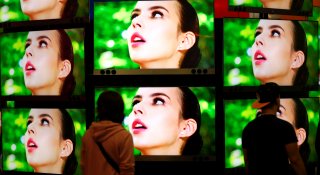 Earlier this month, TCL’s line of Google TV-equipped TVs, which had been sold exclusively in the United States at Best Buy since launch just in August, were suddenly pulled from that chain.

The pullout affected the 5-Series and 6-Series models and was due to performance issues with the TVs, according to multiple media reports.

TCL, at the time the TVs were pulled said in a statement to the media that “some are facing challenges with the stability of the user interface featured on TCL sets with Google TV” while promising improvements in the near future.

Now, just over a week later, those TVs are back.

The Verge reported Wednesday on the return of the 6-Series (R646) and 5-Series (R546) TVs to Best Buy’s shelves, as well as to the retailer’s website. Software updates have also been made available for those who already own those TVs.

“TCL is committed to delivering premium products with world-class experiences and the new product featuring Google TV is certainly no different,” TCL said in a press statement.

“Recent software updates have allowed us to make significant improvements on the stability and speed of the TCL televisions featuring Google TV,” according to the TCL press statement. “With these updates, this product now represents the powerful performance that TCL and Google believe is the future of TV.”

Also, the company has told customers how to download the necessary software updates.

Engadget noticed that Best Buy appears to be offering discounts on the price of the TVs, including $1,000 off the 6-Series MiniLED QLED model, which now goes for $1,300, from the original price of $2,300.

TCL has mostly been associated with the Roku TV platform, although last year it began selling budget TVs with the Android TV interface. This year, it debuted TVs with Google TV, which is the successor to Android TV.

TCL is expected to unveil more at International CES early next month. The company announced in a press statement that it will host a “global press conference” online on January 4, ahead of the company’s “offline” presentation at CES. This will include “smart home in action,” as well as a preview of the 2022 Mini LED TV lineup.

Many major tech manufacturers, including Amazon, Lenovo, and AT&T, have announced that they will not be appearing in person at CES, due to concern over the Omicron variant. CES was held entirely virtually in 2021 but the organizers still plan to hold an in-person event in January but have announced plans to offer free COVID tests to all attendees.