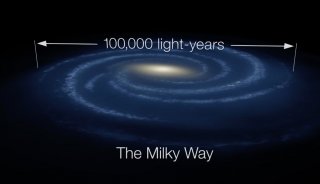 For the first time ever, telescopes around the world have just pinpointed a highly energetic burst of radio waves, also known as fast radio bursts (FRBs), emanating from our own Milky Way galaxy.

This unexpected observation may help contribute to finally solving the mystery of these deep-space radio signals, which have puzzled astronomers for years. Astronomers believe that these FRBs came from a magnetar neutron star called SGR 1935+2154, located about 30,000 light-years away.

On April 27, multiple instruments, including the Swift Burst Alert Telescope, the AGILE satellite and the NICER ISS payload, observed increased activity in SGR 1935+2154. Then the next day, the Canadian Hydrogen Intensity Mapping Experiment (CHIME) detected a signal so powerful that its system wasn’t able to register it, which was reported in The Astronomer's Telegram.

The STARE2 survey, though, came in to save the day, as it was designed specifically for the purpose of detecting local FRBs. It eventually received the signal loud and clear. The gathered data pointed toward SGR 1935+2154 being on the lower end of FRB potency, but it did fit the profile, according to Caltech astronomer Shrinivas Kulkarni.

“If the same signal came from a nearby galaxy, like one of the nearby typical FRB galaxies, it would look like an FRB to us,” Kulkarni told ScienceAlert. “Something like this has never been seen before.”

Magnetars are considered to be particularly odd when compared to ordinary neutron stars. In most cases, they are the extremely dense core remnants left over after a massive star goes supernova.

Most are usually about 12 miles in diameter and have a mass of one to two times that of the sun. But they are so dense that a just a teaspoon of neutron star substance would weigh about 100 million tons. Magnetars also boast about 1,000 times stronger magnetic fields than ordinary neutron stars.

FRBs are powerful blasts of radio waves that last just a few milliseconds, but the origins of this phenomenon are still unknown to scientists. Some have speculated that they could be from starquakes, supernovae or even alien spaceships.

FRBs are indeed one of the most intriguing mysteries in the universe. They are so powerful that they can be detected from millions of light-years away. Some even discharge more energy than half a billion suns. They are incredibly hard to predict and trace, though, as the FRBs usually only have durations of milliseconds.

Astronomers spotted the first FRB with the Parkes radio telescope in 2001. Since then, they have discovered dozens more, but they were always outside our own galaxy. Due to the vast distances of these faraway galaxies, closely studying FRBs was nearly impossible.