Trump Hints at Support for a Boycott of DirecTV 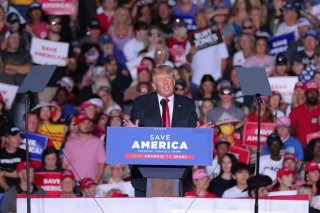 Former President Donald Trump is known for many things, and one of them is calling for boycotts, often in a half-hearted manner.

Last April, after Major League Baseball announced that it was pulling its All-Star Game from Georgia in response to its controversial voting bill, the former president called for a boycott of the league and other companies that pulled out of Georgia, including Coca-Cola and Delta Airlines, per the New York Post.

“Boycott baseball and all of the woke companies that are interfering with Free and Fair Elections. Are you listening Coke, Delta, and all,” Trump said in a statement last spring.

However, it doesn’t appear Trump ever mentioned those boycott threats again. In addition, as CNN reported shortly after Trump called for the boycott, Trump continued to serve Coke products at his properties and appeared to keep up his habit of drinking Diet Coke.

The former president has now hinted at another boycott, this time against carrier giant AT&T.

It started last week when DirecTV announced that it was dropping One America News Network (OAN), a conservative news channel known for its hardcore support for Trump and its promotion of outlandish conspiracy theories. Last fall, Dominion Voting Systems filed a $1.6 billion defamation suit against both OAN and Newsmax for their coverage of conspiracy theories regarding the 2020 election.

DirecTV announced that it dropped the channel "following a routine internal review,” adding that "the question for DirecTV was whether OAN's programming appeals to a broad enough base of customers, given increasing programming costs and more competition for consumers.” DirecTV’s spokesperson declined to say if “editorial policies” had anything to do with the decision, but did deny to NPR that “outside pressures” played any role.

During his rally in Arizona over the weekend, Trump chastised DirecTV for pulling OAN and blamed the removal on “woke executives,” according to Mediaite. “The woke executives, I don’t know what the hell they’re doing,” the former president said at the rally. “AT&T is a company that is in serious trouble. And they need AT&T, and AT&T is saying that they may no longer agree to carry this network that’s doing very well. You know why? Because people told them not to do it.”

“So maybe what we should do is not use AT&T,” Trump added, before noting that the founders of OAN had asked him not to call for a boycott of AT&T.

Trump, in making those remarks, appeared unaware that AT&T is not, in fact, still the parent company of DirecTV. While AT&T does continue to own a majority interest, DirecTV was recently spun off into a separate company and is no longer a subsidiary of AT&T. So it appears unlikely that AT&T executives, “woke” or not, would have called the shots on such a specific decision.

The spinoff of DirecTV took place after Trump left office, although he did have some disagreements with AT&T while he was president. Trump was often so angry with CNN, a WarnerMedia-owned network, that he frequently threatened to block AT&T’s proposed acquisition of Warner. AT&T has since announced plans to also spin off WarnerMedia as part of a pending deal with Discovery.

When AT&T CEO Randall Stephenson retired in April of 2020, Trump tweeted, “Great News! Randall Stephenson, the CEO of heavily indebted AT&T, which owns and presides over Fake News @CNN, is leaving, or was forced out.” He added that “anyone who lets a garbage ‘network’ do and say the things that CNN does, should leave ASAP. Hopefully replacement will be much better!”

OAN carried Trump’s rally live on Saturday, something that none of the major news networks did.