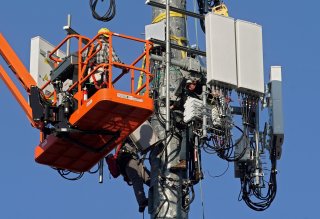 Of the many bogus conspiracy theories that have arisen in relation to the coronavirus epidemic, one of the odder ones is that the virus was somehow caused or spread by 5G, the next-generation wireless standard that's currently rolling out worldwide. The conspiracy theories have even led to vandalism incidents involving 5G towers in Europe, with more than 60 such fires having been set in the U.K. alone.

The claim has been denounced as "complete rubbish" by scientists, who note that there's no connection between the waves produced by 5G and viruses, while coronavirus has spread to parts of the world where 5G has not yet rolled out.

The World Health Organization has put out a "myth busters" guidance, stating that "viruses cannot travel on radio waves/mobile networks.COVID-19 is spreading in many countries that do not have 5G mobile networks."

The latest to denounce the conspiracy theory is the CEO of one of the companies behind 5G, telecom giant Verizon.

Verizon chairman and CEO Hans Vestberg appeared on CNBC this week, to talk about Verizon's reportedly $400 million acquisition of BlueJeans, a videoconferencing company and rival to Zoom and Skype. In the interview, which was itself conducted over a videoconference, Vestberg talked about how BlueJeans will be incorporated into Verizon's 5G network.

When asked in the interview about "conspiracy theories around the world about 5G and the virus… as crazy as they may sound," Vestberg was dismissive.

Some intelligence officials in Europe, per a Business Insider report this week, fear that the conspiracy theories about 5G are being pushed by foreign state actors, possibly Russia or Iran. A Belgian law enforcement official described it to Business Insider as "an anti-vaccination style disinformation campaign by the usual lot of conspiracy theorists and online trolls looking to cause excitement by convincing people these towers are a risk."

Devices equipped with 5G technology have begun to appear on the market, while the first iPhone from Apple with 5G is expected to arrive later this year, barring supply chain delays related to coronavirus.